'Murderers should be taught a lesson through murder': former Karnataka minister

text_fields
bookmark_border
The prime minister may well say that peace should be protected, he said, adding, which does not mean protecting the murderers. 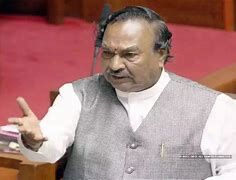 Bengaluru: A former Karnataka minister wanted the murderers of the Udaipur tailor be taught a lesson either through murder or the right punishment.

KS Eshwarappa also said no nationalist would put up with their threat to Prime Minister Modi and allow them to continue live in this country, according to India Today.

The prime minister may well say that peace should be protected, he said, adding, which does not mean protecting the murderers.

Kanhaiya Lal, a tailor based in Udaipur, on Tuesday was brutally killed in broad daylight in his shop by two men who claimed to be avenging insult to Islam.

They made a video of the gruesome act as well as admitting to killing the man for his social media post that supported controversial Nurpur Sharma.

In another video the two men threatened to kill Prime Minister Modi in the same manner.

The police on Tuesday night arrested the two accused from Bheem area of Rajsamand district while they were trying to flee.