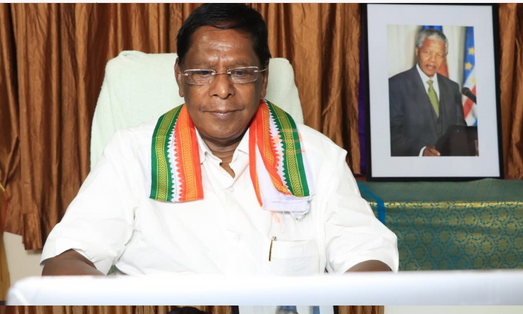 Puducherry: Chief Minister of Puducherry V Narayanasamy on Saturday said the Bharatiya Janata Party (BJP)-led Central government which he said was playing with the lives of the youth by holding the NEET (National Eligibility-cum Entrance Test) despite protests.

Addressing a virtual press conference here, he said the people of Puducherry would teach the BJP a lesson in the forthcoming Assembly polls for sticking to its guns to hold the NEET.

Assembly poll is due in 2021 as the present Ministry which was installed in office in June 2016 would complete its five- year term.

The Chief Minister said he had written several letters to the Prime Minister Narendra Modi urging him to drop the NEET-based selection of the students.

He said NEET, designed on the basis of the CBSE syllabus, would be tough to crack as students here have been following state board syllabus.

So, he said, NEET should be done away with in the interest of the students in Puducherry.

Narayanasamy expressed grief over students in recent days ending their lives by suicide out of fear and anxiety caused allegedly by the Centre's decision to hold NEET for admission to medical courses.

He said the system of selecting students for professional courses by the Puducherry government through centralised admission committee (CENTAC) on the basis of marks obtained in the Plus-two public examination was helpful and did not cause any hardship.

(This report is unedited from PTI feed,except headline)