text_fields
bookmark_border
Activist Gautam Navlakha has been denied bail over the NIA submitted documents, which have been deemed ample proof against him by the NIA special court in a case related to his alleged inflammatory speeches delivered at the Elgar Parishad conclave 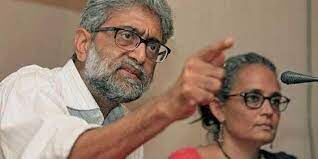 Mumbai: A special NIA court in Mumbai has reasoned its denial of bail to activist Gautam Navlakha saying there is ample proof against the activist in a case filed by the National Investigation Agency in connection with his alleged Elgar Parishad-Maoist links.

The order details was made available on Tuesday.

The case relates to alleged inflammatory speeches delivered at the Elgar Parishad conclave, held at Shaniwarwada in Pune on December 31, 2017, which police claimed triggered violence the next day near the Koregaon-Bhima war memorial located on the city's outskirts.

The Pune police had also claimed the conclave was backed by Maoists.

The NIA later took over the probe into the case, in which more than a dozen activists and academicians were named as accused.

Navlakha (69) was arrested on August 28, 2018, for his alleged involvement in the case. He was initially kept under house arrest, but was later sent to judicial custody and lodged at the Taloja prison in neighbouring Navi Mumbai.

The activist had sought bail claiming he was "falsely implicated" in the case and had no concern with the alleged offence.

His lawyer had argued it was not the case of the prosecution that the applicant was present at the spot on the day of the incident. "There is nothing on record to connect the applicant with a larger conspiracy", the lawyer claimed.

He said provisions of the Unlawful Activities (Prevention) Act (UAPA) are not applicable and there is no material in the entire charge sheet to show the activist in any manner intended or supported any act which disrupts the sovereignty or territorial integrity of India. The applicant (Navlakha) is of old age and has a number of ailments, his lawyer submitted, adding the trial is delayed and it would take a long time, hence prayed for allowing the application.

However, the NIA opposed the application, saying the investigation revealed that the applicant is a member of the Communist Party of India (Maoist). He was in possession of incriminating documents related to the CPI (Maoist), accessible exclusively to the party members, the NIA said.

The prosecution further contended that the 69-year-old activist had been actively involved in fixing appointments and meetings between active urban cadres and underground leaders of CPI (Maoist) under the garb of a fact-finding mission.

He had delivered speeches at different forums on many issues related to the Kashmir separatist movement and Maoist movement, the NIA submitted and prayed for rejection of his bail.

"Perusal of charge ¬sheet, there is ample material against the applicant. Prima facie the applicant seems to be connected with the alleged offence," the judge observed.

"The offence is very serious in nature…In view of the seriousness of the offence and prima facie material against him, he is not entitled to the grant of bail," the court ruled.