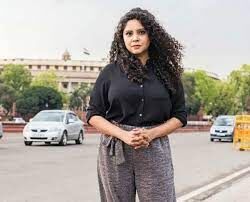 In response to allegations that she is laundering money collected for charitable purposes, journalist Rana Ayyub dismissed those accusations as a "smear campaign. The vocal critic of the ruling party made the statement just after the Enforcement Directorate, or ED, taken in * 1.77 crore belonging to her. She says she is "confident that the allegations leveled against me will not withstand any fair and honest scrutiny."

According to ED sources, an order under the Prevention of Money Laundering Act has been issued to attach a fixed deposit and bank accounts in the names of Ms. Ayyub and her family. By attaching a property, you cannot transfer, convert, or move it.

According to a statement posted on Substack and Twitter by Ms. Ayyub, she says that "As per Ketto's procedure, all donors to my campaigns made donations to Ketto's bank account, which after deducting processing charges, would forward the same for the relief campaign to the designated 2 bank accounts, who in turn would then transfer the entire amount received from Ketto to my bank account,".

"It is pertinent that no foreign donations were received by me or the 2 designated bank accounts, as all the donations were received first in Ketto's bank account, who would send the amount for the relief campaign to the designated accounts in Indian currency. My instructions to Ketto were that any money received in foreign currency, should be returned to the donor, and the relief work was carried out with only domestic contributions," Ms Ayyub added.

Rana further comments that "...In December 2021, I received summons from the Directorate of Enforcement, Delhi Zonal-Il Office, this time under the Prevention of Money Laundering Act (PMLA). I presented myself to the authorities and once again shared all information that was asked of me. To my surprise, the questioning was focused more on my journalistic income, particularly from foreign media houses."

"I have demonstrably shown, before the Income Tax Department, as also before two zonal offices of the ED, that no part of the relief campaign money has been used for any other purpose. It is pertinent that the only unutilised part of the fund, viz. the Fixed Deposit of 50 lakhs, could not be used as it was provisionally attached by the Income Tax Department from 07.08.2021 till 07.02.2022," she stated.

An FIR, or First Information Report, has been filed by Vikas Sankrityayan, a Ghaziabad resident who leads a non-profit organization called Hindu IT Cell. The FIR was filed against Ayyub by the Uttar Pradesh Ghaziabad Police in September.

An ED document attributed to "sources" states that the journalist raised more than 2.69 crore through an online crowdfunding platform called Ketto for charitable purposes between 2020 and 2021.

However, Ayyub stated that "entire donation received through Ketto is accounted for and not a single paisa has been misused".

According to the Enforcement Directorate's note, the entire amount was subsequently deposited in Ms Ayyub's own account. It states that "Funds totalling ₹ 2,69,44,680 were raised on Ketto by Rana Ayyub. These funds were withdrawn in the bank accounts of her sister and father."