text_fields
bookmark_border
They removed the upper layer of fingertip and re-stitched it after removing a part of the tissue, which would heal in a month or two altering the print patterns for up to a year 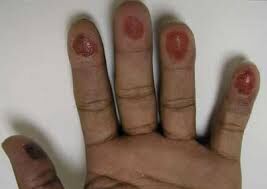 Hyderabad: It is said fingerprints are unique for each person. It is not so anymore for people who get their print patterns altered for securing jobs and perhaps for covering up illegal activities.

Police on Monday arrested four people from a hotel in Hyderabad who were about to perform fingerprint altering surgeries on people at Ghatkesar, here.

Police said that Gajjalakondugari Naga Muneswar Reddy, 36, a radiologist and X-Ray Technician at Krishna Diagnostics in YSR Kadapa district, and Sagabala Venkat Ramana, 39, who is an anaesthesia technician at DBR Hospital, Tirupathi involved in the illegal procedure.

The two men conducted at least 11 fingerprint surgeries to change print patters in Rajasthan and Kerala, charging ₹ 25,000 for each, NDTV reported.

They removed the upper layer of fingertip and re-stitched it after removing a part of the tissue, which would heal in a month or two altering the print patterns for up to a year.

Two people who had their fingerprints altered wanted re-entry into Kuwait after having been deported, police said.

The medical kits used in the procedure alongside other evidences have been seized.

Those underwent the surgeries would later have their fingerprints updated on Aadhaar, adding a new address, before applying for a fresh visa to Kuwait, the police said.

The procedure helped deportees from Kuwait evade authorities to secure re-entry to the nation.