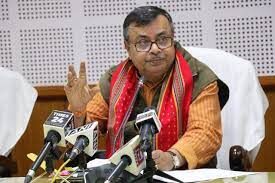 Other personalities Biplab Deb was compared to include Rabindranath Tagore, and Netaji Subhas Bose and Albert Einstein.

Ratan Lal Nath told people in Tripura to consider themselves 'lucky' as Biplab Deb was born in Tripura, according to India Today.

At an event in Dhalai district the minister said unlike previous governments, Deb made "us" dream big and has fulfilled some of those dreams.

According to Trinamool Congress state president Subal Bhowmik comparing former CM to great personalities amounts to showing disrespect towards them.