UP election : "We Fought As Hard As We Could" says Priyanka Gandhi 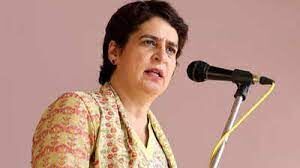 Ms Priyanka Gandhi, who was a major force in the Uttar Pradesh election, remarked, "We did our best. We will wait and see the results."

She arrived in Lucknow on Tuesday as part of the party's 'Ladki Hoon, Lad Sakti Hoon' campaign in Uttar Pradesh.

Exit polls indicate the BJP is likely to get a comfortable majority with its allies in the 403-member Uttar Pradesh Assembly where the majority mark is 202.

The exit poll by News18-P MARQ predicts that the BJP and its allies will be able to obtain 240 seats, Samajwadi Party and its allies 140 seats, BSP 17 seats, and Congress 4 seats.

According to Today's Chanakya, BJP is likely to win 294 seats, SP-RLD will get 105 seats, and BSP will get 2 seats. Congress may get one seat while others might get one as well, the survey said.

A set of exit polls was released after the final phase of the electoral process in Uttar Pradesh. Votes will be counted on March 10.