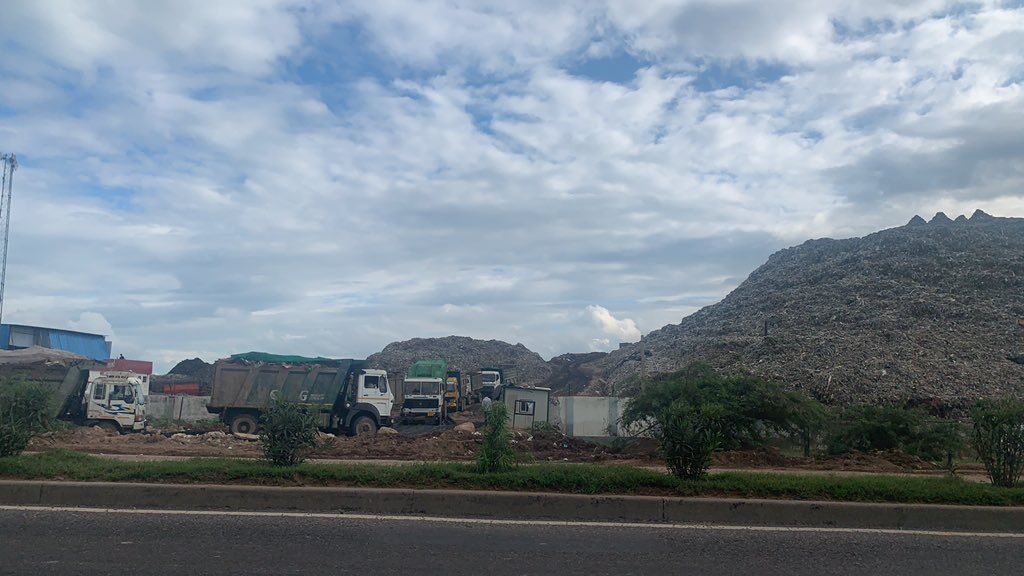 Gurugram: In a case revealing the callousness and apathy of the authorities towards the public life, a mountain of waste recaching upto nearly 42 metres has been formed due to lack of a waste-to- energy plant, at the Bandhwari garbage plant in Gurugram.

The waste-to-energy plant is yet to be set up by Ecogreen Energy Private Limited at the site. The company has a contract to collect house waste from Gurugram and Faridabad districts.

The BJP-ruled Municipal Corporation of Gurugram (MCG) pays crores of rupees every month to the company for garbage collection.

According to MCG officials, nearly 10 acres of land is required for the waste-to-energy plant while the Bandhwadi plant is spread over 30 acres of municipal land.

In 2017, Ecogreen Energy had started work on setting up a waste plant at the same site. For this, 10 acres of land was provided by the MCG at the Bandhwari plant but due to the non-construction of the plant, three million tonnes of garbage have accumulated at the proposed plant site.

The corporation officials informed that the civic body has paid more than Rs 126 crore to Ecogreen in 31 months but the company did not begin the work even after a year of getting environmental clearance.

The officials said nine trommel machines are working to reduce the mountain of garbage. The height of one part of the garbage mountain had reached 42 metres. Nearly 1,700 tonnes of garbage from Gurugram and Faridabad is reaching the Bandhwari landfill daily.

According to information through a Right to Information (RTI) query, fines have been imposed several times on Ecogreen.

As per a National Green Tribunal (NGT) order, the State Pollution Control Board imposed a fine of Rs 25 lakh on November 11, 2019, on the company for spreading pollution and harming the environment. The Faridabad Municipal Corporation did not take action to cancel the company's contract till June 2020, despite imposing a fine of more than Rs 1.57 crore.