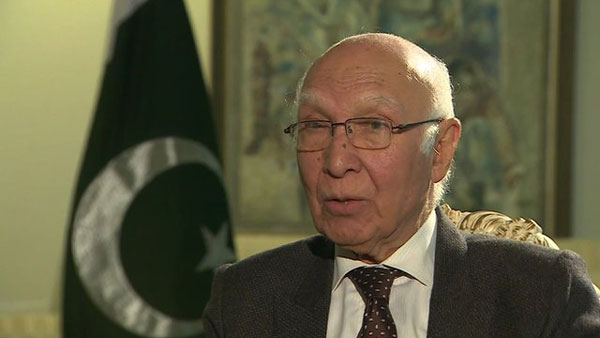 Islamabad: Pakistan has expressed serious concern over the finalisation of a nuclear deal between the US and India, saying it would have destabilising impact on regional stability.

"Pakistan reserves the right to safeguard its national security interests," Xinhua quoted him as saying in a statement.

US President Barack Obama and Prime Minister Narendra Modi Monday achieved a "breakthrough" over the civil nuclear deal, six years after it was signed. They reached the understanding during US President Obama's visit to India which concluded Tuesday.

Aziz said Pakistan valued its relations with the US and expected it to play a constructive role for strategic stability and balance in South Asia.

He also opposed permanent seat to India in the UN Security Council after President Obama supported New Delhi's move to seek the seat.

"Proposals to add new centres of privilege in the Security Council run counter to these collective objectives of Security Council reform and have no rationale in this age of democracy, inclusiveness and accountability," Aziz said.

Pakistan, he said, supports a reformed Security Council that corresponds to the positions and collective interests of all member states, not just a few.

"Pakistan, along with a large majority of UN member states, favours a comprehensive reform of the Security Council to make this principal organ of the United Nations more representative, democratic, effective, transparent and accountable," Aziz said.

"A country, in violation of United Nations Security Council resolutions on matters of international peace and security, such as the Jammu and Kashmir dispute, by no means qualifies for a special status in the Security Council," he said.

"Pakistan is opposed to yet another country-specific exemption from NSG rules to grant membership to India, as this would further compound the already fragile strategic stability environment in South Asia, would further undermine the credibility of NSG and weaken the non proliferation regime," Aziz said.

He said Pakistan remained opposed to policies of selectivity and discrimination, adding Pakistan was not averse to civil nuclear cooperation and NSG membership for Non-NPT states provided it was based on the principles of nondiscrimination and objective nonproliferation criteria.