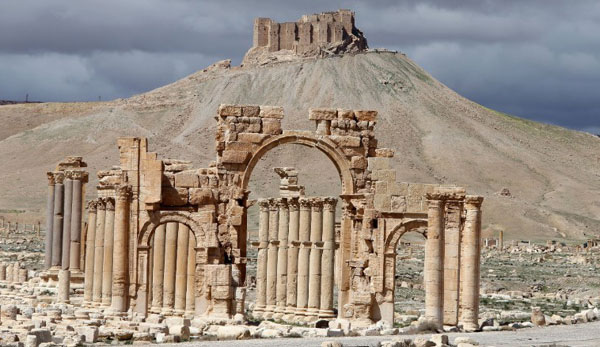 Damascus: Syrian authorities confirmed on Tuesday that the Greco-Roman ruins in the central Syrian city of Palmyra were undamaged, but that two Islamic mausoleums in the city's suburbs were destroyed by the Islamic State (IS) group.

"The archaeological part of Palmyra is intact, although the terrorist group (Islamic State) planted explosives there in recent days," director-general of the Syrian department of antiquities and museums, Maamoun Abdulkarim, said.

Al-Homsi said the first shrine was on a hilltop northwest of the modern part of Palmyra, while the second was located in the al-Guta orchards, in the middle of a palm grove.

"Abu Baha Edin was at least 500 years," Abdulkarim said, stressing that extremists, despite being Muslims, destroyed the shrines as they believe that constructing mausoleums and venerating saints is a violation of the Islamic faith.

Abdulkarim added that radicals destroyed "dozens" of similar sites in Syria in the past.

Syrian authorities confirmed on Monday that IS planted mines and explosives in the ancient parts of Palmyra, the site of the ancient ruins.

Before the Syrian conflict started in March 2011, the ruins of Palmyra were one of the main tourist attractions in the country and the region.

Palmyra is also one of six sites in Syria included in the list of UN Educational, Scientific and Cultural Organisation (UNESCO) World Heritage sites, along with the old districts in Damascus, Aleppo and Bosra, the Crusades-era castle Crac des Chevaliers, and the ancient villages of northern Syria.

These sites are now also included on the UNESCO's list of World Heritage in Danger.

Since last February, IS radicals have destroyed several archaeological sites and museums as well as Islamic mausoleums and mosques in areas under their control in Iraq.

Almost a year ago, IS proclaimed a caliphate in areas under its control in Syria and Iraq.