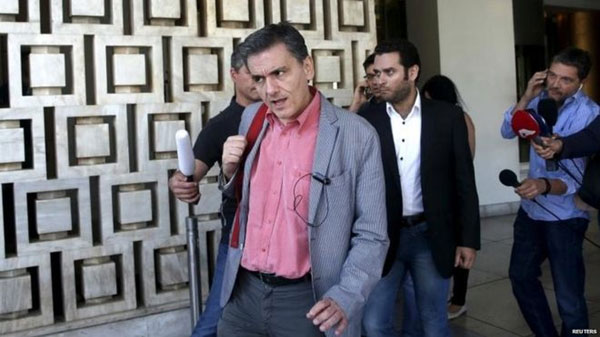 Athens: Greece will not repay the loan instalment due to the International Monetary Fund (IMF) on Tuesday, Greek Finance Minister Yanis Varoufakis said even as the country mulled taking legal actions to block its exit from the eurozone.

However, Varoufakis expressed hope that a debt deal can be reached with international creditors, Xinhua news agency reported.

The Greek minister made the statement outside the finance ministry in Athens when asked by media about the issue with the critical deadline expiring on Tuesday afternoon.

He categorically said "No." His comments came ahead of the July 5 referendum called by Prime Minister Alexis Tsipras.

Greece's failure to meet its financial obligations to the IMF for a second time in a month and pay off 1.5 billion euros ($1.7) in loan instalment could launch formal procedures for default in coming weeks.

Varoufakis made remarks amid media reports that in the past few hours Greece's dialogue with international creditors has resumed to achieve a last-minute debt deal and avert a financial collapse and possible exit from eurozone.

According to an earlier report, Athens is said to have received a message from European Commission President Jean-Claude Juncker on Monday night to accept the creditors' draft.

The Leftist Greece government is believed to have rejected once again the lenders' draft as a basis for further discussion, but was preparing a new agreement proposal to submit to the other side before calling for a Eurogroup meeting as early as Tuesday evening, television channel Mega reported, citing sources.

According to other media reports, Prime Minister Alexis Tsipras was under pressure by a group of his close aides, ruling party radical left SYRIZA lawmakers and ministers, including Deputy Prime Minister Yannis Dragassakis, into seizing the opportunity for last-minute negotiations.

According to the reports, the government's General Secretary Spyros Sagias has threatened to reign, while the country's economy minister has expressed strong doubts over the referendum idea that triggered a series of developments over the past weekend after Tsipras's announcement on Saturday.

With banks closed and capital controls imposed since Monday, the clock was ticking against Greece and the eurozone.

Scenarios circulated in Athens suggested that Greece was already on way to the return to its own currency drachma. Haris Theocharis, a former general secretary at the ministry of finance and current member of parliament with the centrist River (Potami) party, claimed that the government was making preparations for the transition.

The prime minister's office dismissed the suggestion as an "irresponsible science fiction scenario".

"The Greek government will make use of all our legal rights," Varoufakis told the British daily on Tuesday,

Greece, according to the newspaper, has threatened to file a court order not only to block the expulsion from the shared currency, but also to avoid stifling the country's banking system.

"We are taking advice and will certainly consider an injunction at the European Court of Justice. The EU treaties make no provision for euro exit and we refuse to accept it. Our membership is not negotiable," the minister argued.

Varoufakis said Greece has sufficient liquidity to carry it until the referendum, but acknowledged that the capital controls introduced by creditor institutions over the weekend are causing problems for companies.

In accordance with these measures, banks will remain closed until July 6 and a daily cap for cash withdrawal stands at 60 euros ($66.70), Efe newsd agency reported.

The failed negotiations in Brussels have made a Greek exit from the euro more possible than ever.