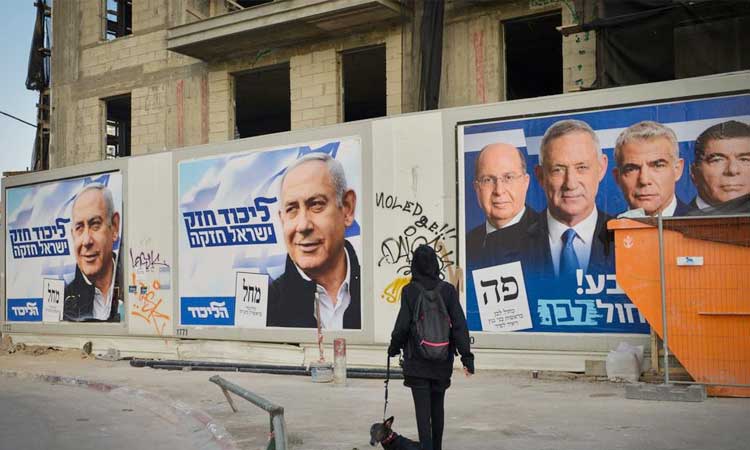 Jerusalem: Prime Minister Benjamin Netanyahu Wednesday appeared headed for a record fourth term after his Likud party emerged as the surprise winner in Israel's general elections based on a campaign revolving around no compromise attitude on Palestine's statehood.

With nearly all votes counted, Netanyahu's party is set to emerge as the single largest party with 29 seats in the 120-member Parliament – the Knesset -- five seats more than the closest rival the Zionist Union led by Isaac Herzog in a mandate considered a clear victory in the fractured Israeli polity.

The party registered victory on a campaign revolving around strong security for the Jewish state focused on denying Iran nuclear capability and a non-compromising attitude in the peace process with the Palestinians.

It was a stunning turnabout from the last pre-election polls published on Friday, which showed the Zionist Union with a four or five seat lead.

Ballots were cast at 10,372 polling stations throughout Israel Tuesday with 65.7 per cent of the nearly 5. 89 million eligible voters participated in the snap polls called last December after Netanyahu's coalition government started to fall apart.

65-year-old Netanyahu, who has been in power for nine years over three terms, claimed victory for his ruling party and invited potential coalition partners to immediately enter talks for the swift formation of what is expected to be a religious-nationalist government.

"The reality isn't waiting on us," Netanyahu said just hours after it became clear that his Likud party had scored a decisive victory over Zionist Union in yesterday's poll.

"Reality isn't taking a break. The citizens of Israel expect us to quickly put together a leadership that will work for the sake of the country's security, economy, and society as we promised to do, and that is what I will do."

The Prime Minister said that he had already spoken with the heads of parties that he plans to invite into his coalition, including Bayit Yehudi chief Naftali Bennett, Kulanu's Moshe Kahlon, Yisrael Beytenu head Avigdor Liberman, Shas leader Aryeh Deri, and United Torah Judaism representatives Yaakov Litzman and Moshe Gafni.

Zionist Union leader Herzog, who led in opinion polls before the elections, conceded defeat but vowed to fight for the issues on which his party contested the elections.

"This is not an easy morning for us and for those who believe in our way. We will lead the fight, together with our partners in Knesset, for the values believe in," Herzog said.