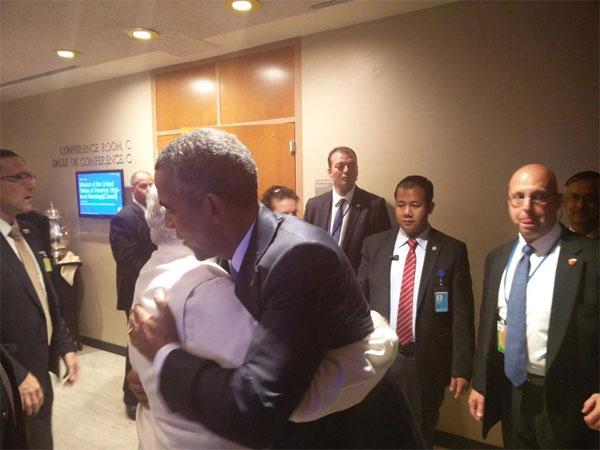 New York: Climate change and cooperation in combating terrorism and boosting defence ties were high on the agenda of talks between Prime Minister Narendra Modi and US President Barack Obama here on Monday that saw both leaders renew the warmth of ties with hugs.

After hour-long talks, including delegation-level, Obama in his media statement recalled his January visit for India's Republic Day, terming it a wonderful visit.

He said both sides agreed that it was a crucial issue and all countries have responsibility towards fighting climate change.

Obama said he was "encouraged by the impressive nature of Modi's commitment to clean energy. And I really think the Indian leadership in the upcoming Paris conference will set the tone not just today but in the decades to come (on climate change)".

Obama said both sides with "efforts" can solve the problem.

Referring to Modi's address to the Indian diaspora, he said the Indian community in the US was very large and successful.

He hailed the strategic ties that encompasses education to defence procurement.

Modi, in his media statement, said both nations can apply innovation and technology for achieving Sustainable Development Goals, including combating climate change and conserving nature.

"President and I share an uncompromising commitment on climate change, without affecting our ability to meet the development aspirations of humanity. We have both set ambitious national agendas," he said.

He said India's measures to combat climate change includes a plan for 175 GW of renewable energy by 2022, as well as a development strategy to transition to a more sustainable energy mix.

"I also thank President Obama for his positive response to my call for a global public partnership for developing affordable clean energy sources that will enable faster adoption of clean energy across the world."

"We should work together to advance that goal. And, it is equally important to develop mechanisms to ensure that the affordable also become accessible to those who need it the most," said Modi.

Modi thanked Obama for the US' support to India for a permanent seat in a reformed UN Security Council.

He also appreciated America's support for India's membership of the international export control regimes within a targeted time frame.

"Our defence cooperation, including defence trade and training, is expanding. As existing terrorism threats grow and new ones emerge, we have resolved to further deepen cooperation on counter terrorism and radicalism. We have just had a successful cyber security dialogue," he said.

"I welcomed the progress in our Joint Strategic Vision on Asia-Pacific and Indian Ocean Regions and our engagement with partners like Japan," he said.

Modi said that since his visit to the US last September, both sides have "achieved significant progress in our bilateral cooperation and international partnership".

He said India looks forward to working with the US for India's early membership of Asian Pacific Economic Community.