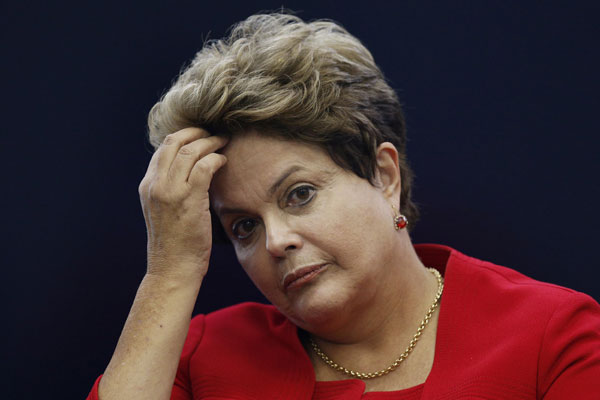 Brasilia: The lower house of Brazil's parliament have voted in favour of impeaching President Dilma Rousseff, a move that could see the country's first female leader removed from power.

After over five hours of voting late Sunday night, more than 342 lawmakers, the two-thirds majority required by law, have voted in favour of impeachment, CNN reported.

More than 130 lawmakers have voted against it.

The 513 legislators voted one by one, all of them given 30 seconds to speak before casting their ballots.

The impeachment motion will now go to the Senate which will vote whether to open a trial against the president.

If a majority approves it, Rousseff will have to step down for 180 days to defend herself in the trial. She would be replaced by Vice President Michel Temer, leader of the Brazilian Democratic Movement Party (PMDB) who broke away from the government two weeks ago and decided to support the process leading to Rousseff's dismissal.

If the Senate approves the impeachment motion, Rousseff could be suspended as early as May which would be about three months before the Summer Olympics start in Rio de Janeiro, an event that was supposed to showcase Brazil as a rising power on the global stage.

Thousands of pro- and anti-impeachment protesters gathered in the capital Brasilia and other cities to watch the dramatic vote, broadcast live on national television.

Advocates for impeachment dressed in yellow and green at protests across the country.
Pro-government supporters wore red, the colours of Rousseff's Workers' Party.

Lawmakers have accused Rousseff of hiding a budgetary deficit to win re-election in 2014.

Opponents blamed Rousseff for the worst recession since the 1930s, now in its second year.

She is also held accountable for a massive bribery and corruption scandal that has engulfed dozens of politicians in the Workers' Party and coalition government.

Rousseff's exit would mark the end of an era for the Workers' Party, which assumed the presidential office in 2004 with the election of former president Luiz Inacio Lula da Silva who remained in office for two terms.