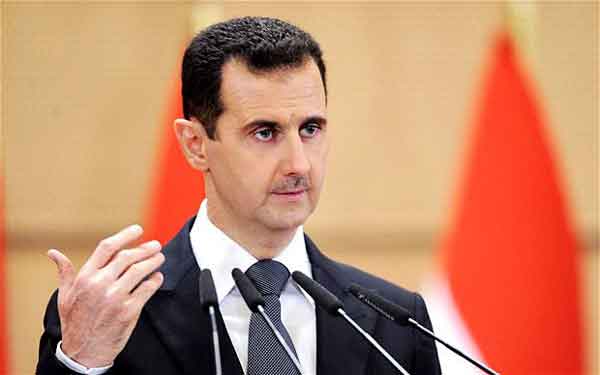 Damascus: Syrian President Bashar al-Assad said he was ready for cease-fire in Syria on condition that the "terrorists" don't exploit it.

In an interview with the Spanish newspaper, El Pais, whose script was published by state news agency SANA, Assad said halting the military operations in Syria demands deterring the terrorists from exploiting it to enhance their positions.

He pointed out that countries, like Turkey, must stop sending more terrorists and arms as well as providing logistical support to the terrorists, Xinhua news agency reported.

"Of course... we have declared that we are ready (to respect a cessation of military operations) but the matter is not only about declaring it because the another party may declare the same thing. It's about what will be done on ground," he said.

"The matter is primarily related to a cessation of fire but there are other complementary, and more important factors, such as preventing the terrorists from exploiting the cessation of the military operations to enhance their positions... it's also related to preventing countries like Turkey from sending terrorists and arms into Syria," the president continued.

The remarks comes at times Russia and the US were pushing to achieve a cessation of hostilities in Syria.

In a telephone call Saturday, US. Secretary of State John Kerry and Russian Foreign Minister Sergei Lavrov discussed the progress about the "modalities" for a cessation of violence in Syria.

Meanwhile, Assad hailed the Russian and Iranian role in supporting his administration as "essential" contribution to the advance of the Syrian army against the militant groups on key Syrian frontline.

Achieving a cessation of hostilities and unhindered humanitarian access to all besieged Syrian cities were the outcome of the talks between superpowers in Germany, Munich this month.

Those two factors are deemed important for starting a second round of talks in Geneva between the Syrian government and opposition in a bid to help find a political end to the Syrian crisis.