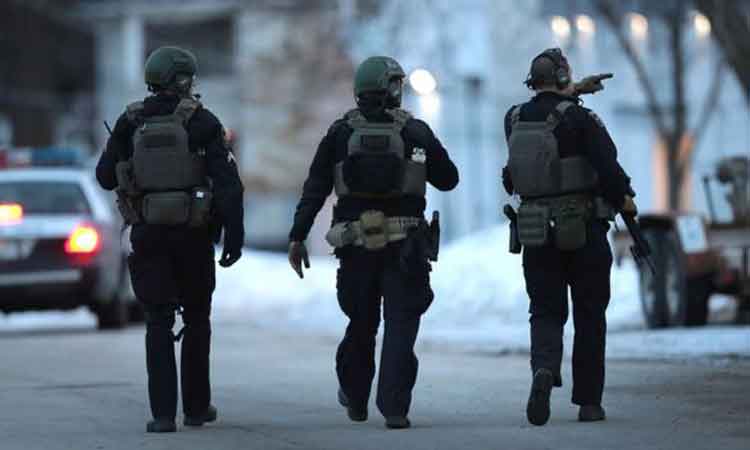 Minneapolis (US): The killing of an African American man in a car by police and its aftermath that was video-streamed live by his girlfriend at a suburb here Wednesday night has put a harsh spotlight on the US, which projects itself as the world's guardian of human rights.

This was the second killing in two days of an African American by police that was caught on camera in the US which is in the throes of a highly-polarised election campaign where race has emerged as a contentious element.

The chilling video of the shooting's aftermath in the local suburb of Falcon Heights here in Minnesota state showed 32-year old Philando Castile slumped in the car seat with blood spurting through his T-shirt while a screaming police officer points a gun at him. The victim's girlfriend, Lavish Reynolds, says on the video, "Please Jesus don't tell me he is dead. ... Please officer, don't tell me you have done this to him."

Her young daughter, who witnessed the shooting, is also seen in the video.

The video next shows her being ordered to kneel on the street by police and later handcuffed.

Reynolds describes in the video what happened after police stopped Castile for a broken tail light in his car, saying he was shot four times. Police "just killed my boyfriend," she says and appeals for people to come to the incident's location. The video's release could not be delayed because it was instantaneously livestreamed on Facebook and reached millions who saw a shocking depiction of the incident.

Alize Castile, the sister of Castile, said he was killed "like an animal" and called it a "modern-day lynching".

In the Tuesday incident, a DVD seller was shot by police in Baton Rouge in the southern state of Louisiana. The shooting of 37-year-old Alton Sterling was captured on a cellphone by a bystander and on a car's dashboard camera.

Police had reportedly been called to the outside of a store by a homeless man who was begging and told them that a man was brandishing gun. But the store's owner, Abdullah Muflahi, told CNN that he did not notice anything that warranted calling police.

The proliferation of cellphone cameras and video recording devices provide a definitive account of police encounters with civilians, which previously could have been brushed aside without evidence questioning the official claims.

Since the shooting of a teenager, Michael Brown, in Ferguson in Missouri in 2014, a renewed wave of protests have erupted around the nation and given rise to the "Black Lives Matter" movement.

Neither the White House nor the State Department that selectively criticise other countries over treatment of minorities had reacted to the Minnesota shooting as of Thursday morning.

The head of the Minneapolis chapter of the African American civil rights organisation, the National Association for the Advancement of Colored People (NAACP), Nekima Levy-Pounds, described the latest incident as an "innocent man being killed at the hands of the police".

Soon after the shooting, hundreds of protesters chanting "Wake them up" gathered outside the Minnesota governor's mansion with signs proclaiming, "Black Lives Matter." Governor Mark Dayton is a member of the Democratic Party-affiliated Democratic-Farmer-Labor Party in a state that prides itself on its liberal values.

Castile, a long-term employee of the St Paul government schools system, was a nutrition services supervisor.

The acting chief of the suburban police force, Jon Mangseth, said that a gun was recovered at the scene.

On the video Reynolds said that Castile's gun was licensed and that he told the officer about it and said he was going to get his wallet that had his identification when he was shot. She also said they had "weed," or marijuana, in the car.

Complicating the racial situation, the police officer who shot Castile may be of East Asian descent. Reynolds described him as "Chinese".

Mangseth, who did not identify the officer, said that he was sent on paid leave.