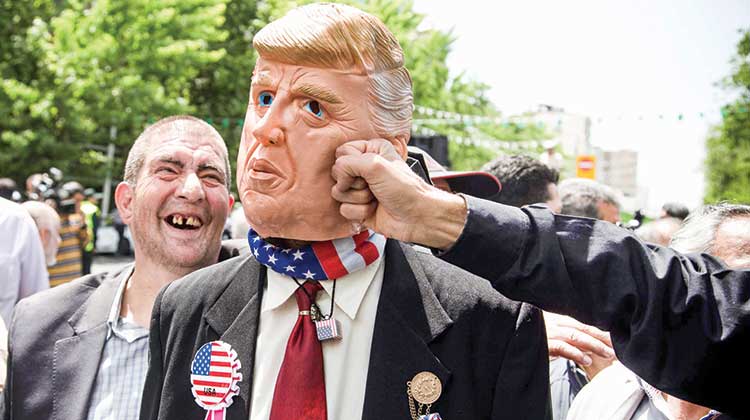 "This turnout is a response to false remarks of the new White House rulers and the people are telling the world through their presence that the Iranian people must be spoken to with respect and dignity," Rouhani said in a public speech as thousands took part in rallies marking the anniversary of the 1979 Islamic Revolution.

State TV showed people carrying pictures and effigies of US President Donald Trump, burning US and Israeli flags and shouting "Death to America!" as Supreme Leader Ayatollah Ali Khamenei called on citizens to show that Iran was not afraid of American "threats".

Rouhani said Iran will not yield to the "language of threats" and will "strongly confront any war-mongering policies" of the new US administration.

Some carried pictures of Trump as well as British Prime Minister Theresa May and Israeli Prime Minister Benjamin Netanyahu captioned "Death to the Devil Triangle".

Rouhani's remarks came after US President Donald Trump said he had put Iran "on notice" in reaction to a January 29 missile test and imposed fresh sanctions on individuals and entities.

Both in the region and the US, some inexperienced figures have taken over the helm, Rouhani said warning that "all should speak with the language of respect and praise in front of the Iranian nation".

The Iran President said the 1979 Revolution freed the country from dependence on foreigners, including the US, and awarded the people with self-determination.

He went on to enumerate some instances of the country's recent achievements, which the nation has made through its steadfastness in pursuing its rights and economic interests.

"The whole world has accepted our nuclear right," he said. "Today, we are happy to see our nuclear industry offering its products to the international community and moving towards the path of international trade," Rouhani said.

The country now possesses one of the most modern centrifuges, namely the IR8 centrifuge, at its nuclear facilities, Rouhani noted.