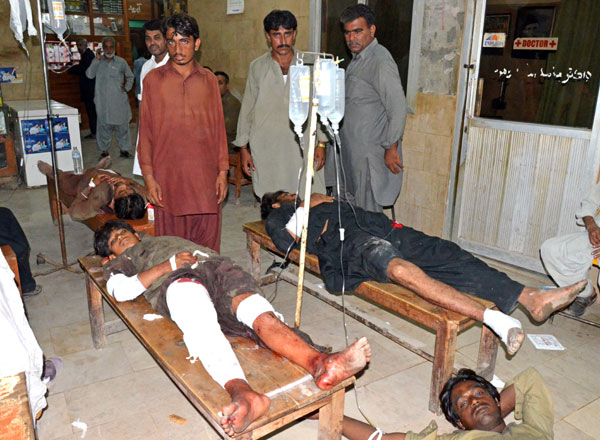 Lahore: A bomb blast in an upscale shopping centre in Pakistan's eastern city of Lahore killed at least eight people and wounded 20 on Thursday, officials said, the latest in a surge of violence that has shaken the country.

Security forces cordoned off the residential neighbourhood, also home to banks and coffee shops, rescue officials said, after what one bank worker said was a "frightening" explosion.

Punjab police spokesman Nayab Haider told Reuters the explosion was caused by a "planted bomb" that was either time- or remotely detonated. No one was allowed to leave or enter the area because the bomber was suspected to be at large, officials said.

Reports of a second explosion turned out to be a tyre blowout that caused panic due to the tense atmosphere in the city, a government official said.

Pakistan has been struck by a wave of militant attacks in recent weeks, killing at least 130 people across the country and leaving hundreds wounded. The worst of the attacks was at a Sufi shrine in southern Sindh province that killed 90 people.

Thursday's bombing was the second attack in Lahore in two weeks. A suicide bombing on Feb. 13 killed at least 13 people and wounded more than 80 at a protest near the provincial assembly.

Government and military officials have vowed extensive operations to hunt down militants across the country and Pakistan's border with Afghanistan has been shut down due to security concerns.

After the shrine bombing, Pakistani security forces said they had killed more than 100 suspected militants in targeted campaigns across the country.