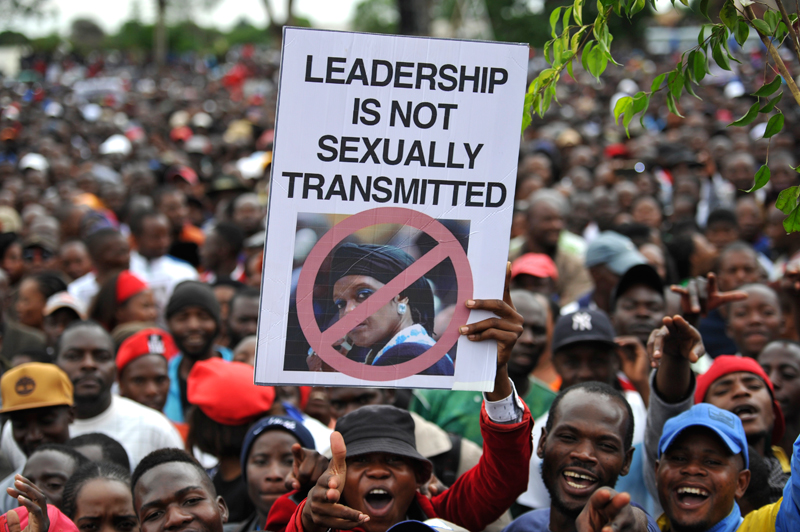 The military denies staging a coup, saying that Mugabe is safe and that it was acting against "criminals" surrounding him.

Their move follows a power struggle over who might replace Mugabe.

Mugabe, 93, has dominated the country's political scene since it gained independence from the UK in 1980.

The AU had "serious concern" at the situation and "reiterates its full support to the country's legal institutions", the statement said.

After days of tension and rumour, soldiers seized the state broadcaster ZBC late on Tuesday.

"This is not a military takeover of government," he insisted.

Maj. Gen Moyo also said Mr Mugabe and his family were "safe and sound and their security is guaranteed". It is not clear who is leading the military action.

Since then, military vehicles have been out on the streets of Harare, while gunfire has been heard from northern suburbs where Mr Mugabe and a number of government officials live.

In a statement, the office of South African President Jacob Zuma, said: "President Zuma spoke to President Robert Mugabe earlier today who indicated that he was confined to his home but said that he was fine."

There has been no direct comment from President Mugabe, nor his wife Grace, whose whereabouts are unclear.

AU Commission Chairperson Moussa Faki Mahamat said in a statement on Wednesday the AU was closely monitoring developments in Zimbabwe after the military seized power from the government, Xinhua reported.

"I urge all stakeholders to address the current situation in accordance with the Constitution of Zimbabwe and the relevant instruments of the African Union, including the African Charter on Democracy, Elections and Governance," Mahamat said.

He stressed that the crisis should be resolved in a manner that promotes democracy, human rights and socio-economic development of the country.

He also expressed the AU's commitment to work with the Southern African Development Community (SADC) to ensure peaceful resolution of the crisis.

Zuma, in a statement, expressed SADC's grave concern over the political situation in Zimbabwe and urged both the Zimbabwean government and the military to resolve the political crisis amicably.

Zuma on Wednesday dispatched an envoy to turmoil-hit Harare to hold discussions with the military and Zimbabwean President Mugabe.