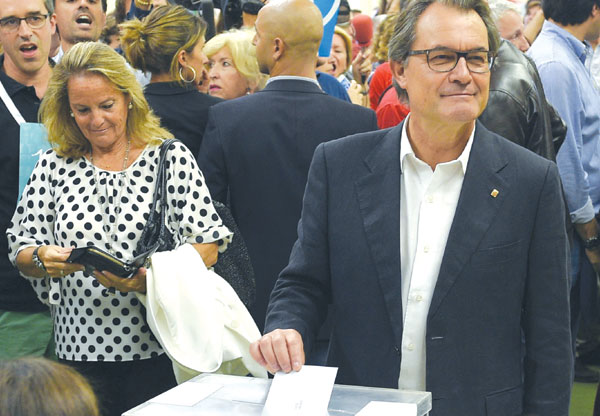 Barcelona: The Catalonian government has announced that 2.2 million ballots were cast in its independence referendum and 90 per cent of those votes were in favour of the region breaking away from Spain, compared to 7.8 per cent against.

He said over 2.26 million votes had been tallied even though 400 polling stations had been closed or were occupied by Spanish police who carried away ballot boxes and polling material.

On Sunday night, the regional president, Carles Puigdemont said Catalonia "has won the right to decide its future, its sovereignty".

He said that in the coming days he would forward the referendum results to the regional Parliament and that if a majority of people voted to secede he would unilaterally proclaim independence for the region.

In a surprise move, the region established a "universal census" that allowed people to vote at any polling station in the region and also permitted them to vote without an envelope and to use home-printed ballots.

The ballot papers contained just one question: "Do you want Catalonia to become an independent state in the form of a republic?"

Spanish Prime Minister Mariano Rajoy, who had declared the referendum illegal, said that "there has been no plebiscite on self-determination".

The intervention of security forces to impede the vote led to over 800 people being injured, according to regional authorities.

Catalonia, a wealthy region 7.5 million people in north-eastern Spain, has its own regional government, or Generalitat, which already has considerable powers over healthcare, education and tax collection, but is not recognised as a separate nation under the Spanish constitution.

Catalonia's campaign to break away from Spain has gained momentum since 2010, when Spain's economy plunged during the financial crisis.

Catalonia held a symbolic poll in 2014, in which 80 per cent of voters backed complete secession -- but only 32 per cent of the electorate turned out.