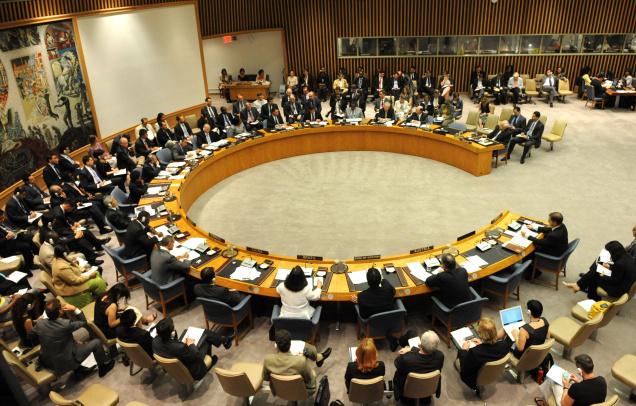 United Nations: The UN Security Council (UNSC) has unanimously approved a fresh round of tougher sanctions against North Korea for its nuclear and ballistic missile programmes.

But the measures sought by the US were blunted by China and Russia highlighting the powerful influence that Beijing and Moscow with their veto powers wield against Washington internationally when America cannot act unilaterally.

On Monday, the UNSC, however, condemned Pyongyang for its "flagrant disregard" of its previous resolutions, and demanded that it immediately suspend its ballistic missile and nuclear programmes.

The sanctions caps oil exports, bans all textile exports, restrict future employment of North Koreans abroad, allow countries to inspect ships going and coming from North Korea but without using force, and add more weapons-related items and technologies to the list of items prohibited for transfer to Pyongyang.

It also froze the assets of three government agencies, including a military one.

The sanctions fell short of the original US demand for banning foreign travel by North Korean leader Kim Jong-un and freezing his assets.

The US wanted a complete ban on oil exports to North Korea, immediate end to employment of an estimated 93,000 of its citizens abroad, forcible boarding of ships trading with that country to check for contraband, and restrictions on UN.

US Permanent Representative Nikki Haley, who proposed a virtual blockade of North Korea but agreed to the watered-down version after negotiations with China and Russia, after the vote said that over 90 per cent of North Korea's exports were now banned when combined with earlier sanctions on iron ore, metals, seafood and coal exports.

It will lose $1.3 billion in annual revenues, she added.

Haley acknowledged China's influence saying: "Today's resolution would not have happened without the strong relationship that has developed between President (Donald) Trump and Chinese President Xi (Jinping), and we greatly appreciate both teams working with us."

Both China, the patron of North Korea, and Russia, one of its main trading partners, sought to put pressure on the US to agree on not overthrowing the Kim Jong-un regime or to force a reunion of North and South Koreas.

Representatives of both countries emphasised finding a solution through negotiations and dialogue.

China's Permanent Representative Liu Jieyi said that the US must consider what he called the legitimate concerns of all parties and make it a part of its policy towards the region to not seek regime change in Pyongyang or a collapse of the country or an accelerated pace of reunification of the two Koreas.

He also opposed the deployment of the Terminal High Altitude Area Defence (THADD) anti-missile system by the US in South Korea asserting that it undermined the security of China and other countries in the region.

Before the resolution was voted, North Korea's official news agency quoted the Foreign Ministry as saying the country was "quite ready to use any ultimate means" to retaliate against the US for the sanctions and claiming it had "near-to-completion nuclear capability".

The new sanctions follow North Korea's most powerful nuclear test to date which the country had carried out on September 3.