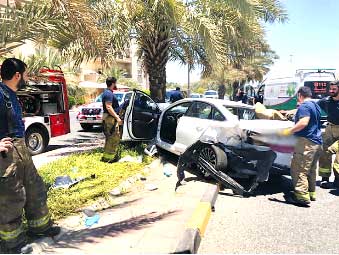 Kathmandu: At least 16 people were killed and 27 others injured in a road accident in Nepal's Dadeldhura district on Thursday, the authorities said.

District Administration Officer Mohanraj Joshi said the incident happened when the ill-fated bus veered off the mountain road and plunged down some 300 meters into a river at Amargadhi municipality, Xinhua reported.

"Ten people died on the spot and six others breathed their last in course of treatment in hospital. The injured are receiving treatment," Joshi told Xinhua by phone from the crash site.

The victims were returning to their homes after participating in the Ugratara Jatra, a locally celebrated cultural fair in the district.

Authorities said the death toll might increase as the rescue operation was being carried out by the police and local residents.

Poor condition of roads, drunk-driving, over-speeding, and ill-maintained vehicles are blamed for frequent road accidents in the mostly mountainous country.