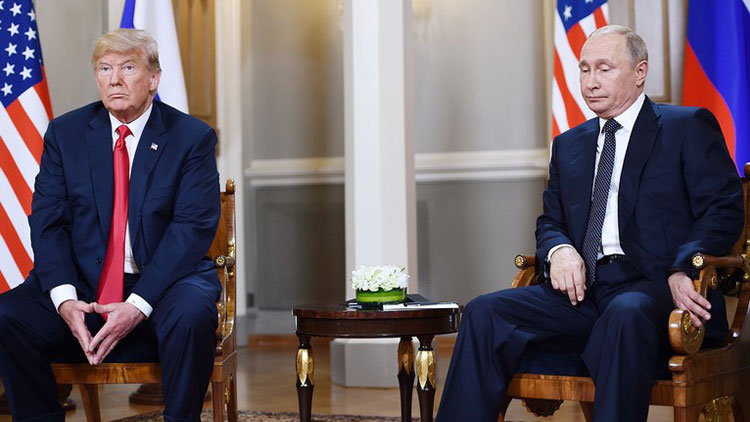 Osaka: US President Donald Trump on Friday met his Russian counterpart Vladimir Putin here and light-heartedly told him not to meddle in the 2020 American presidential elections.

Trump, who is seeking a second term in the next election, met Putin on the sidelines of the ongoing two-day G20 summit in this Japanese city, reports Efe news.

At the beginning of their meeting, a journalist asked Trump if he intended to ask the Russian President to not interfere in the 2020 election result, as Moscow was allegedly involved in the 2016 polls.

"Yes, of course I will," Trump responded, before he turned slightly towards Putin and without looking him in the eyes, said with a smirk: "Don't meddle in this election."

Trump wagged his finger towards Putin, who smiled, and repeated: "Don't meddle in this election."

This was the first meeting between the two leaders since the Helsinki Summit that caused an uproar almost a year ago when Trump appeared to accept Putin's denials of Russian interference in the 2016 elections.

"It's a great honour to be with President Putin … We have a very, very good relationship and we look forward to spending some very good time together. A lot of very positive things are going to come out of the relationship," Trump said at the beginning of Friday's meeting.

He added that they planned to discuss "trade and including some disarmament, some - a little protectionism perhaps, in a very positive way".

Putin added that he agreed with Trump and said that "our teams have been together working" since the Helsinki meeting and that talking with the US president was "a great opportunity".

In December 2018, Trump cancelled a meeting scheduled with Putin during the last G20 summit in Buenos Aires after a Russian coast guard vessel intercepted two Ukrainian gunboats and a tug just off the Crimean Peninsula in the Kerch Strait.

Russia still has them detained, but the White House decided to schedule a meeting between Trump and Putin at the Osaka summit.

Upon being asked on Friday about the Ukrainian gunboats, Trump said that he had not discussed the issue with Putin recently.

The sides discussed Syria, Ukraine and the Iran-US tensions that have escalated in the last few months, according to a brief US statement after the meeting.

They also spoke about the political crisis in Venezuela, according to the White House, which did not want to give more details.