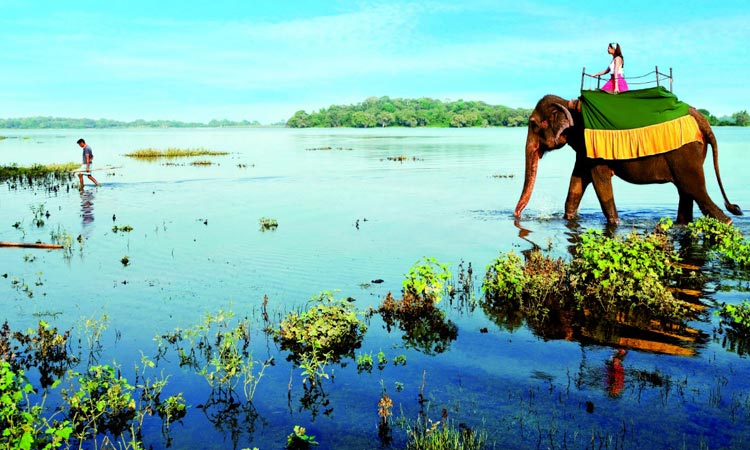 People view a damaged shop after a mob attack in Minuwangoda on May 14, 2019. - A Sri Lankan province north of the capital was under indefinite curfew on May 14 after the first death in anti-Muslim riots in the wake of the Easter terror attacks, police said.

Colombo: Attacks against minority Muslims only fulfils the agenda of extremist militants among the community who want to divide people, Muslim political leaders said here Thursday as they appealed to the radical elements to shun violence, amid widespread communal riots following the Easter blasts.

Anti-Muslim riots have killed one person and caused extensive damage to homes, businesses and mosques in Sri Lanka this week.

The communal violence is a fresh backlash from the Easter Sunday attacks where nine suicide bombers, including a woman, carried out a series of devastating blasts that tore through three churches and three luxury hotels, killing 258 people and injuring over 500 others.

"Those who attack Muslims only fulfil the agenda of extremist militants. Terrorist want other communities to target Muslims. They wanted to divide us," Imtiaz Bakeer Markar, a senior Muslim politician told reporters.

"We are not with them and a majority of Muslims do not approve it (the Easter Sunday attacks)," Ferial Ashraff, a former minister said.

She said the Muslim community had volunteered to give information to security forces in their operations to nab the extremists.

"Please do not push them towards divisive groups by attacking them," Ashraff said.

Responding to criticism that Muslims have become religiously more aggressive living among the majority Buddhist community, Kabir Hashim, a minister said, "We are not ashamed to do soul searching, we may have made mistakes in the past, but we are ready to correct them. We are ready to move forward as one nation".

Earlier, a group of opposition legislators moved a motion in Parliament for a vote of no trust against Industry and Trade Minister Rishath Bathiyutheen who leads a small Muslim party, a coalition partner in the government, for alleged complicity with the jihadists.

The motion accuses Bathiyutheen of applying pressure to release the supporters of the jihadi group, supplying empty ammunition to a copper factory owned by one of the suicide bombers and being friends with the rich father of the two suicide bombers, a Muslim preacher who is under arrest.

Sri Lanka has faced condemnation for the recent anti-Muslimn violence.

"The United Nations welcomes the unequivocal condemnation expressed on many occasions by political, religious and other community leaders towards the hate-mongering and violence carried out by a few," the UN statement in a said.

"As a country, Sri Lanka remains at a critical juncture where a unified rejection of hate is of paramount importance for sustaining peace," it said.

The Organization of Islamic Cooperation (OIC) said it was closely monitoring the anti-Muslim attacks that have taken place at various locations.

"The OIC calls on the authorities in Sri Lanka to ensure the safety and security of the Muslim community in the country and combat the rising tide of violence, extremism and hate speech, which is spreading fear and mistrust among the communities," it said.

The European Union while welcoming the arrests stressed the need to ensure the rule of law.

The Sri Lankan police said over 70 people have been arrested for attacking the Muslims.

The attacks are a fallout of the April 21 attack.

The Islamic State claimed responsibility for the attack, but the government has blamed local Islamist extremist group, the National Thawheed Jamaath (NTJ), for the bombings.