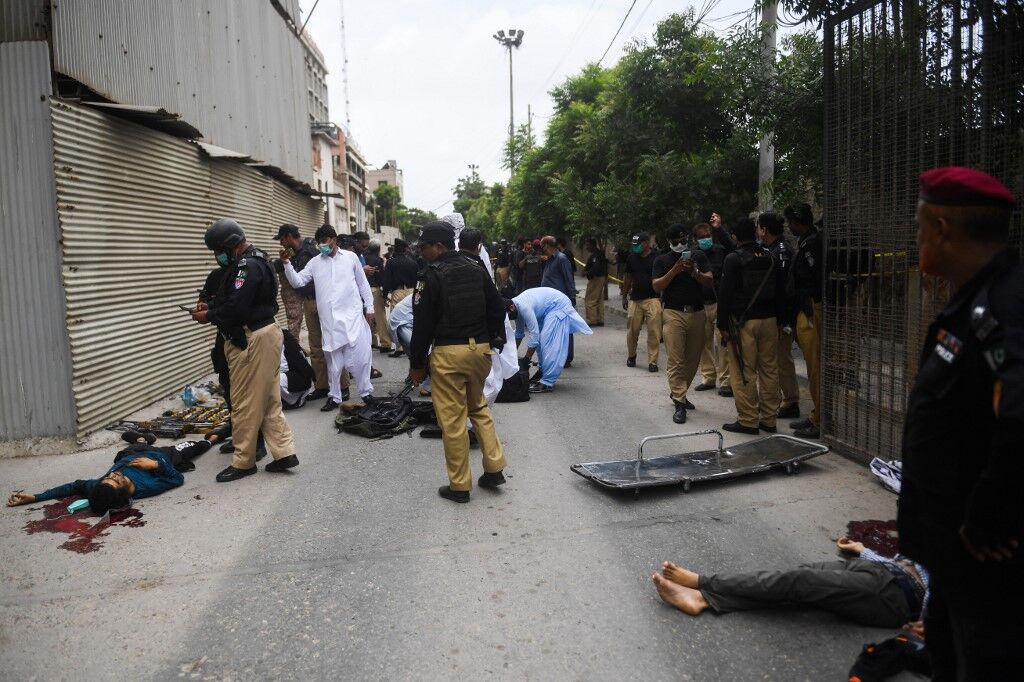 cancel
camera_altPolice collect evidence next to the bodies of alleged gunmen outside the Pakistan Stock Exchange building in Karachi on June 29, 2020

Karachi: Terror gripped Pakistans economic hub Karachi on Monday when terrorists attempted to storm the Pakistan Stock Exchange (PSE) building, which resulted in the deaths of 10 people, including the four militants who were gunned down by law enforcement agencies.

The Baloch Liberation Army (BLA), a militant group working out of Afghanistan has claimed responsibility of the attack.

BLA said its Majeed Brigade, consisting of a suicide attacker, carried out the attack, on the first day of trading week.

The four terrorists, armed with explosives and ammunition, entered the parking area of the PSE building, located at I.I Chundrigar road, the business centre where important offices, including the State Bank of Pakistan (SBP) and Security Exchange Commission of Pakistan (SECP) are located.

According to witnesses, the terrorists threw grenades on security guards, followed by heavy firing at officials.

"The attackers came to the building in a silver Toyota corolla car, parked it close to the entrance gate and started throwing grenade bombs and kept shooting," said an eyewitness.

Security forces were quick to respond to the attack as an instant operation was initiated that neutralized all the four terrorists.

The other victims comprised four security guards, two locals, while seven others were also injured and taken to the hospital.

"The terrorists were equipped with heavy ammunition and explosives. They were attempting to enter inside the stock exchange building. However, their intentions were blocked by our quick response teams, who neutralized all four terrorists," said a police official.

As per the Pakistan Stock Exchange officials, the attack was carried out in the compound of the building, confirming that the one of the four terrorists was able to reach inside.

Pakistan Rangers cordoned off the area and secured the location, concluding the operation after declaring the area cleared of terrorists.

Sindh Chief Minister Murad Ali Shah condemned the incident, saying that the attack was "akin to an attack on national security and economy", Dawn news reported.

"Anti-state elements want to take advantage of the virus situation," he said in the statement.

Sindh Governor Imran Ismail condemned the incident, saying: "We shall protect Sindh at all costs."

The attack has raised serious concerns over the re-emergence of terror outfits in the country.