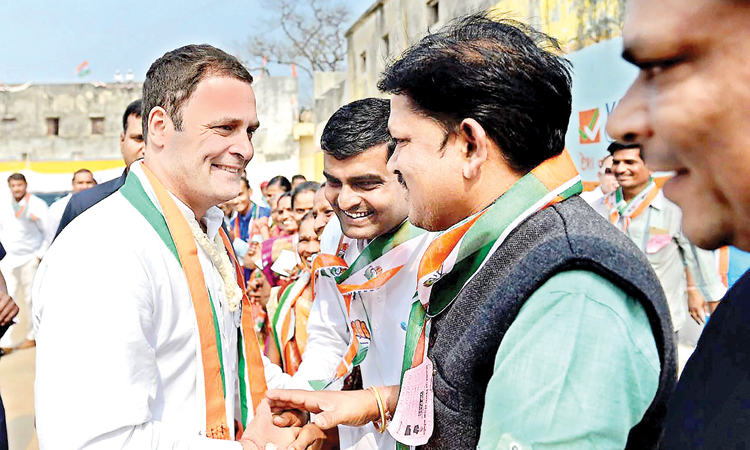 Thiruvananthapuram: Congress vice president Rahul Gandhi Tuesday appealed to the Congress workers in Kerala to embrace the party not just physically but in spirit also.

"I will borrow from what Antony said and I appeal to all of you that you should embrace the party not just physically but in spirit also," said Rahul while addressing the valedictory function of the state-wide yatra of State Congress president V.M. Sudheeran who criss-crossed the state in the past one month.

Rahul also applauded the working of the party in Kerala and said that this is going to be the model for the party in the rest of the country.

"The working of the Congress party in Kerala is a model for me and the one that's going to be a model for the rest of the country for the party. I will work with all of you to make it more strong and vibrant and to see that our party returns to power here and in the centre," said Gandhi.

Gandhi arrived here Tuesday evening. Present on the occasion were all the senior leaders of the party including A.K. Antony.

However, Gandhi cautioned the party leaders to see that they remained united.

He also said that even though he has been to Kerala many times in the past, he has not been able to spend much time here. "I promise you that the next time when I come, I will spend more time with all of you. I like coming to Kerala because I learn a lot both politically and other wise ," said Gandhi.

Gandhi who is staying overnight in the city, will meet the top leaders of his party and also the allies of the ruling Congress-led United Democratic Front. He will attend a meeting of leaders of the party and return to Delhi in the afternoon.

All the state leaders who spoke, stressed the need for lending all help and support to strengthen the hands of party president Sonia Gandhi and Rahul Gandhi.