Aryan Khan given bail, NCB says he tried to deal in commercial...

It's just a phrase meaning 'a celebration of tradition'; Javed Akhtar...

Thrissur Pooram held in all its glory 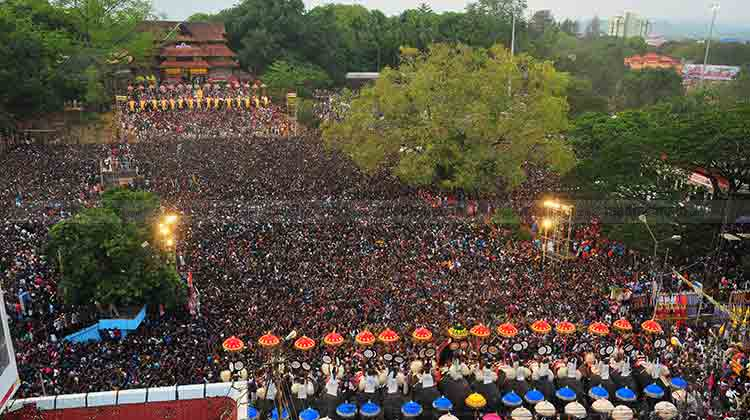 Thrissur: The two centuries old popular temple festival in the state—Thrissur pooram -- was held here Wednesday in all its pomp and glory as thousands of people from far and near, including foreign tourists, witnessed the parade of 30 richly caparisoned elephants and performance by over 500 percussionists.

The spectacle of face-to-face meeting of the 30 elephants -- 15 each from the Paramekkavu and Thiruvambady temples -- and 'Kudamattam' (change of colourful ornamental silk parasols by people mounted on their top in quick succession) at the sprawling Thekkinkadu maidan provided a visual treat to the people who thronged the venue.

The festival, in its 217th edition, also gave an insight into the best of temple art and culture in 'God's Own Country' with the music ensembles of 'Panchavadyam' and 'Pandimelam' in front of the elephants by the percussionists.

The display of golden caparasons (Nettipattams), ornamental fan made of peacock feathers, royal fans, sacred bells and decorative umbrellas were a sight to watch as the two main dewasoms competed with each other to outperform.

Aiming to prevent the parading of elephants during the Pooram, the People for Ethical Treatment of Animals (PETA) New Delhi, had filed a PIL in the Kerala High Court. However, a division bench had declined to interfere in the matter.

The government also made it clear that it would not interfere with the age-old traditional convention of Pooram.

Hollywood Actress Pamela Andresson had also sent an e-mail to Chief Minister Oommen Chandy to prevent the parading of elephants.

Thrissur Pooram had its origin in 1798 through a royal edict of the then Raja Rama Varma, popularly known as Shakthan Thampuran, a powerful ruler of the erstwhile princely state of Cochin. The edict entrusted two local temples -- Paramekkavu and Thiruvambady -- as the main sponsors of the festivities to be conducted in a competitive spirit.

Besides the main poorams of the two temples, small poorams from nearby temples converged at the sanctum sanctorum of the famous Vadakkunnathan temple.

Several foreigners witnessed this year's pooram, which which will come to an end in the wee hours tomorrow with a four-hour long display of fireworks, marking the grand finale of the festivities.