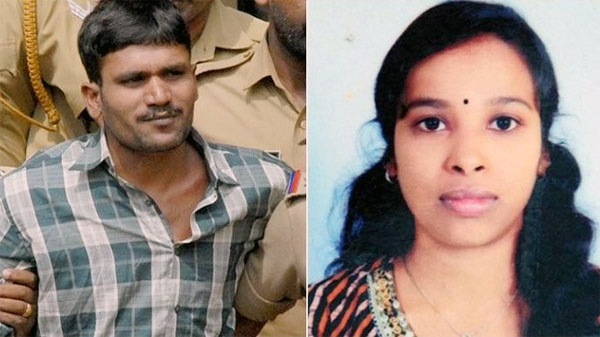 New Delhi: The Supreme Court has dismissed a curative petition filed by the Kerala government challenging the dropping of murder charge against convict Govindachamy in the sensational Soumya rape case.

"Having gone through the curative petitions and the relevant documents, in our considered opinion, no case is made out within the parameters indicated in the decision of this court... The curative petitions are, accordingly, dismissed," a six-judge bench headed by Chief Justice J S Khehar said.

The order was passed yesterday during in-chamber proceedings in which lawyers do not participate.

The incident had taken place when Soumya, an employee of a Kochi shopping mall, was travelling in a ladies coach on the Ernakulam-Shoranur passenger train on February 1, 2011. She was attacked and pushed off the train by Govindachamy, the prosecution had said.

It had also said the man jumped off the train, carried the injured woman to a wooded area near the track at Vallathol Nagar and raped her. She had succumbed to injuries at the Government Medical College Hospital, Thrissur, on February 6 that year.

The case had also led to the issuance of contempt notice against former apex court judge Justice Markandey Katju, who had criticised the verdict, for making some remarks against serving judges in one of his blogs.

Later, he had tendered an apology, leading to the withdrawal of the contempt proceedings against him.

A three-judge bench of Justices Gogoi, Pant and Lalit had on September 15 last year dropped the murder charge against the convict, but had upheld the life term for raping the 23- year-old sales representative in Kerala.

The verdict had left the victim's family in shock. They had dubbed it as "heart breaking", saying it was "failure" of the state prosecutor to "properly" present the case in court.

In its verdict, the court had discharged Govindachamy under section 302 (murder) of IPC, in which maximum sentence is capital punishment, saying there was no intention on his part to kill the victim but only to sexually assault her by keeping her in a supine position.

The prosecution had pointed out that Govindachamy had already been convicted in eight cases in his native state.

A fast track court in 2012 had awarded death sentence to the accused, considering him to be a habitual offender, and held that the brutal rape was one of the reasons for the victim's death and the nature of the crime was savage and had shocked the society.

The High Court had upheld the death sentence two years later, against which he had moved the Supreme Court.