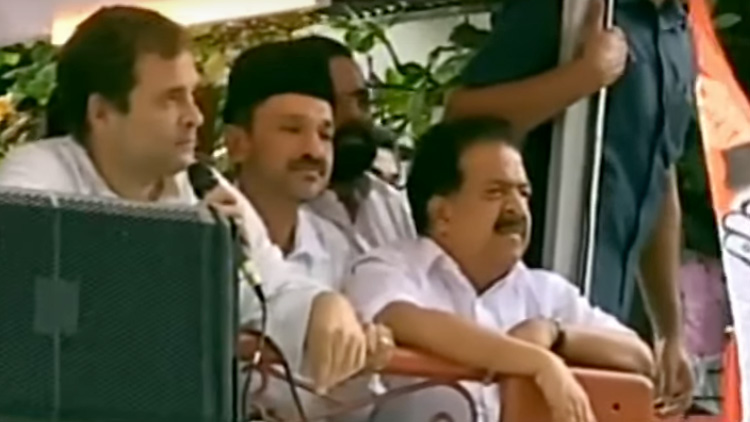 Rahul with UDF leaders at a rally in Wayanad on Wednesday

Wayanad: Reaching out to the people in Kerala's Wayanad, Congress President Rahul Gandhi on Wednesday assured that them he will be with them forever.

In his first visit to the Wayanad Lok Sabha constituency after April 4 when he came along with his sister Priyanka Gandhi to file his nomination, he earlier made a quick visit to the famed temple of Lord Vishnu at Thiruneli where he performed "beli tharpanam" in memory of his father, former Prime Minister Rajiv Gandhi.

Gandhi had on his previous visit to Kerala expressed his wish to visit the temple and perform the puja, but the Special Protection Group (SPG), however, did not allow it due to security reasons, former Chief Minister Oommen Chandy said.

Dressed in white dhoti and wearing an angavastra, Gandhi walked to the temple from the Devasom Guest house in Thiruneli.

He took note of every detail told to him by the temple priests and then prayed to the deity. He, along with the priests, later walked some 700 metres to the spot where his father's ashes was immersed on May 30, 1991.

The Congress President then addressed three political rallies soliciting votes for himself and for United Democratic Front candidates.

"I stand here not as a politician, but as a son, brother and a friend. I decided to contest from here so as to project that south India is as important as other places. I seek a relation with Wayanad that will be there forever," said Gandhi to a huge round of applause at Sultan Battery.

"I have come to know all the problems that you are facing here and I am not like Prime Minister Narendra Modi and will never give you a false promise. I wish to thank everyone here who gave me a chance to contest from here," he added.

In between, he met the 25-year-old Sreedhanya Suresh, who earlier this month, became the first person from the Scheduled Tribe community in the state to have cleared the Civil Services examination and secured 410th rank.

At Wandoor, despite heavy rains, a huge crowd had gathered to hear him.

Some people had a heated argument with the security officials, but the moment Gandhi arrived and started to speak, all became calm.

After his rally, Gandhi left from the Kozhikode airport and it would now be the turn of Priyanka Gandhi to arrive for a brief visit to round off the campaign.

In Wayanad, from where he is contesting along with his traditional seat, Amethi in Uttar Pradesh, the Congress chief faces the Communist Party of India's P.P. Suneer, who is the candidate of the ruling Left Democratic Front and Bharath Dharma Jana Sena Chairperson Tushar Vellapally, who is the National Democratic Alliance candidate.

Wayanad Lok Sabha constituency came into being in 2009 and it was won by senior Congress leader M.I. Shanawaz in the elections since then, but he passed away last year.

The top brass of the state Congress is leaving nothing to chance and is determined to give their President a record margin of victory.

Elections to Wayanad will be held along with the state's other 19 seats in the third phase of the Lok Sabha polls on April 23.