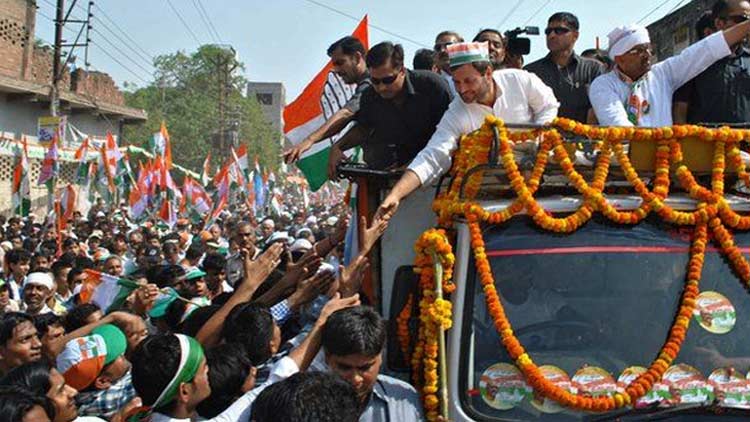 LDF, UDF and NDA rallies converge at a junction in Kottayam

Thiruvananthapuram: Campaign for the Lok Sabha elections came to a close across Kerala at 6 p.m. on Sunday amid reports of skirmishes between workers of the three rival political parties coming in from several parts of the state.

A record 227 candidates will fight it out for the 20 Lok Sabha seats in Kerala, which go to the polls in the third phase of polling on Tuesday.

Among those affected by the skirmishes were senior Congress leader A.K. Antony and the party's candidate from Thiruvananthapuram, Shashi Tharoor, who were was stopped by angry Left workers near here and had to taken to safety by their security officials.

A peeved Antony later said that this was the first time that he encountered such a fracas and that it happened in front of the police.

"If this is the fate of the leaders, how will a free and fair election be held? Both Chief Minister Pinarayi Vijayan and Prime Minister Narendra Modi are responsible for unleashing violence," Antony said.

In Vadakara, where an intense poll battle is on the cards between Congress' K. Muraleedharan and CPI-M strongman P. Jayarajan, the Kozhikode District Collector has clamped Section 144 at five places in the constituency from 6 p.m. on April 23 to 10 p.m. on April 24 to ensure peaceful atmosphere.

In the Pathanamthitta constituency, the vehicle of BJP candidate K. Surendran was blocked by Left workers.

The other places where party workers clashed with each other were Alappuzha, Kottayam and Idukki.

In Kochi, the police resorted to lathi charge to disperse the workers of the Left and the Social Democratic Party of India (SDPI).

The CPI-M-led Left Democratic Front is hoping to do well in the Lok Sabha elections as it feels the people will vote for the Left in appreciation of the three-year rule of the Pinarayi Vijayan government.

"Our candidates will win big, as our good governance is being felt by more and more people. At several places, there is an unholy alliance between the Congress, the BJP and the Indian Union Muslim League, which will see the end of the UDF," Vijayan said.

"The UDF will make it 20 out of 20 in Kerala. That's what I could sense as I travelled all across the state. The BJP will be ousted from power," said Ramesh Chennithala, Congress leader and leader of the Opposition in the state.

BJP state President P.S. Sreedharan Pillai said: "The development agenda set out by Prime Minister Narendra Modi has been widely accepted, and it will be there to be seen on May 23," said Pillai.