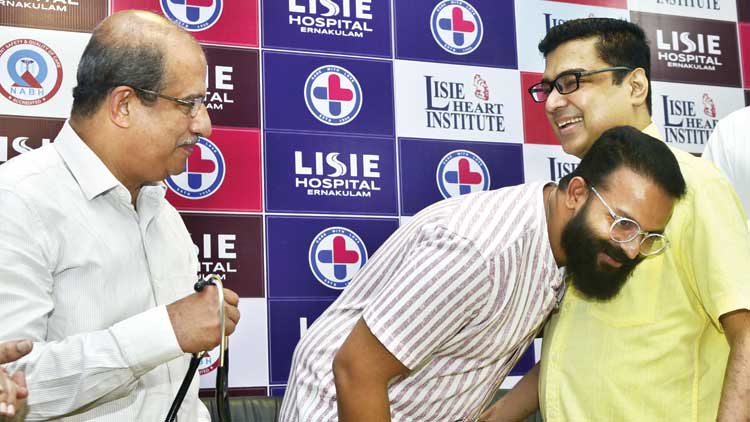 Kochi: Girish Kumar just followed his heart when the first transplant failed eight months later in 2013.  The IT professional from Palakkad is now living with a third heart.

A miracle of sorts in medical history, Kumar on Wednesday celebrated his “second rebirth” into fifth year. Actor Jayasurya alongside doctors and staff of Lisie Hospital joined the celebration.

Kumar was suffering from dilated cardiomyopathy (loosening of heart muscles and losing its elasticity), necessitating a transplant at the age of 38 years.

Eight months into transplantation, he developed an infection on one of heart valves. Back in Lisie Hospital again, this time in serious condition, he had to be revived from a cardiac arrest.

Doctors presented him with two options: either a valve replacement or heart transplant. The former could have high risk of re-infection.

"If I get a matching heart, I am ready for a second transplant," Kumar said choosing the latter.   Dr Jose Chacko Periappuram, cardiothoracic surgeon, still remembers his words.

He would not give a damn about the risks involved even after doctors had briefed him about them.

Thanks, the very next day he received a matching heart. He has been living with the third heart since.

A second heart transplant is perhaps rare even in world statistics, according to Dr Periappuram.

"He's a real fighter” he said. Kumar was no stranger to major surgeries. Earlier he had undergone a hip joint replacement, and a surgery for a kidney stone.