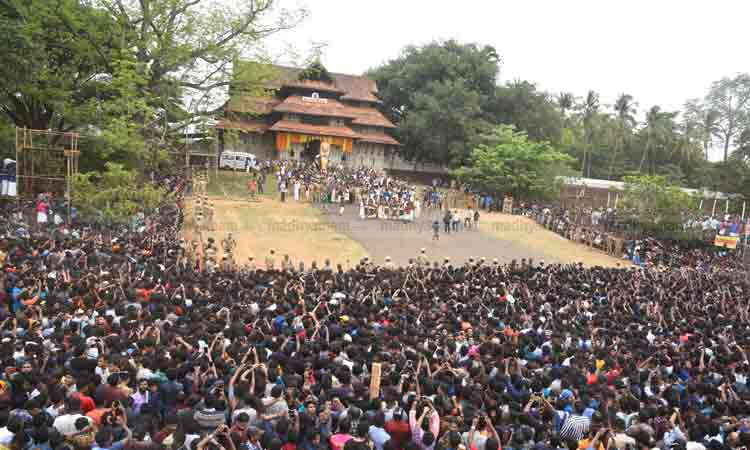 Thrissur: The Kerala government's decision not to allow a 54-year-old elephant to feature in a prominent temple festival here has led to a boycott of all events by the elephant owners, a move likely to play spoilsport in the famed 'Pooram' festivities.

This year's Pooram festivities take place on May 13.

The tusker, called 'Thechikottukavu Ramachandran', is supposed to symbolically push open the southern entrance of Thrissur's Vadakkumnathan temple on May 12, which signals the start of the main event of Thrissur Pooram festivities.

Speaking to IANS, P. Sasikumar, General Secretary of the Elephant Owners Federation, the only body of owners of captive elephants in the state, said the decision of Kerala Forest Minister K. Raju was most unfortunate.

"On April 10, a decision was taken that the elephant can take part in events in Thrissur district and the Minister had presided over the meeting. We do not know what happened after that. His statement that came early this week was a rude jolt to all of us. Hence we have decided that from May 11, not a single elephant of ours will be given for taking part in any festival. This one-sided decision is not acceptable to us," said Sasikumar.

Ramachandran has killed seven people in the past and is considered a tough elephant to handle.

Speaking to IANS, R. Chandran, President of the Thechikottukavu Devasom, which owns Ramachandran, said the decision of the Minister had come as a "shock".

"It was a shock to all of us when we saw the statement from the Minister who was also part of the meeting which allowed Ramachandran to take part in the festivals in Thrissur. There is some conspiracy behind this sudden change in a decision that was already taken. We hope better sense prevails," said Chandran.

"It is common knowledge that Ramachandran's right eye has a vision problem while his left eye is hundred per cent fit. Even the courts have ruled that blindness is not a disease," he added.

Minister for Agriculture and Raju's CPI colleague V.S. Sunilkumar, who also hails from Thrissur, said that it was unfortunate that the elephant owners had taken such a position.

Thrissur Pooram is billed as the 'mother of all festivals' in Kerala and its history dates back to the late 18th century when it was started by Sakthan Thampuran, the 'Maharaja' of the erstwhile Kochi state.

The most keenly watched event of the festivities is the parading of more than 50 elephants along with cracker displays.