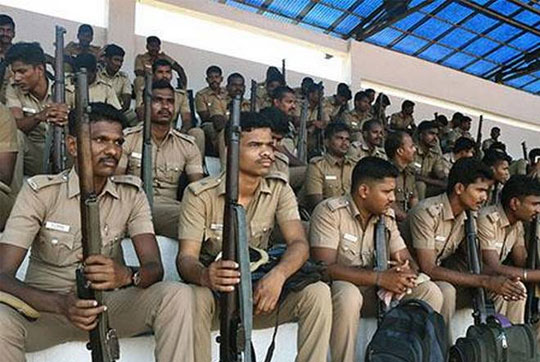 Thiruvananthapuram : The CAG report on missing rifles and live cartridges rocked the Kerala assembly on Monday as opposition Congress-led UDF insisted on a CBI probe which was rejected by Chief Minister Pinarayi Vijayan.

The assembly was adjourned for the day in the pre-lunch session by Speaker P Sreeramakrishnan as the United Democratic Front members stormed the Well holding banners and raising slogans after their notice for an adjournment motion on the issue was rejected.

It was first raised during the Question Hour and again by way of the adjournment motion notice, but Vijayan asserted no rifle was missing from the Special Armed Police Battalion here as found by the Comptroller and Auditor General (CAG) and the cartridges were lost mainly during the previous UDF rule.

The chief minister said the Left government was viewing the matter 'seriously, adding one police official was arrested and a departmental inquiry pending against 11 others in connection with over 12,000 cartridges going missing.

"There is no relevance for a CBI probe right now. An effective and comprehensive investigation by our own agency, crime branch, is progressing...let its report come first," he said.

Replying to the notice for adjournment motion later, he said: "we don't have anything to hide. We just followed the procedures."

As the opposition targeted state police chief Loknath Behara, who came in for rap from the CAG for purchasing luxury vehicles and constructing villas diverting funds and violating norms, Vijayan said it was not fair to "tarnish the image of a person who is not in the House".

"If you all are looking for removing the DGP, then let me make it clear. We are not going to remove him. Your agenda is not going to work here," the Chief Minister said.

Leader of the Opposition Ramesh Chennithala alleged the Chief Minister was trying to 'trivialise' the "serious issue" and demanded a comprehensive probe into it.

He also lashed out at Vijayan for supporting Behara and said "You are whitewashing the DGP." The CAG report had mentioned nine points which indicated corruption in the police department, he added.

Congress member P T Thomas alleged Vijayan was using the "Delhi links" of Behara to save himself from the over two decades old Lavalin corruption case.

It is related to alleged corruption in the award of contract to Canadian company SNC Lavalin for renovation of hydel projects during 1996-98 when Vijayan was the power minister. CBI's appeal against acquiital of Vijayan and others is pending in Supreme Court.

Hitting back, Vijayan said: "I have heard members mentioning Lavallin case here. What is it? Pinarayi Vijayan is not an accused in the case. The trial court acquitted me, the CBI went to hight court and the appeal was dismissed."

Chennithala maintained the apex court was yet to clear Vijayan.

Earlier, the House spent nearly 40 minutes of the question hour on the CAG report.

Fielding a volley of questions, Vijayan said: "Of the total 660 INSAS automatic rifles with the state armed force battalion, 647 were physically counted by the Crime Branch team recently and the remaining 13 were found to have been issued to armed force battalion under training in Manipur".

He also accused the previous UDF government of "covering up" the complaint of missing cartridges when the issue had cropped up in 2015.

He said as per rules, after the CAG report was tabled in the assembly, the Public Accounts Committee (PAC) will hear the official and will take necessary action accordingly.

The CAG, in a damning report tabled in the state assembly on February 12, had found shortage of 25 INSAS rifles and 12,061 live cartridges from the SAP battalion here.

There was shortage of 250 9-mm Drill Cartridges, which was "covered up" with dummy cartridges, the report on General and Social sector for the fiscal ending March 31, 2018 had said.