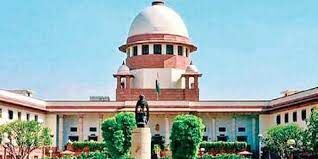 New Delhi: A controversy over Kerala ministers' personal staff receiving pension after two years of service has been roiling in the state lately. The Supreme Court on Monday has come down heavily on the state for this "life-long" pension.

Justice S Abdul Nazeer is quoted as saying, "It is the only state where the Minister appoints persons for two years, and they get full pension throughout their life. Tell your government."

The court said as much, turning down a plea by the Kerala State Road Transportation (KSRTC) which challenged "price charged for diesel by state-owned oil marketing companies from bulk buyers," according to Indian Express.

Justice Nazeer asked if the state had money for that (pension) and then, "why are you here for this?" The court said it had read the report regarding the pension in Indian Express and asked the senior advocate appearing for KSRTC to convey "this" to the government; the advocate responded that he would convey the apex court's concerns.

"The two-judge bench, led by Justice Nazeer and including Justice Krishna Murari, gave the petitioner the liberty to approach the Kerala High Court on the issue of fuel price" according to Indian Express.

KSRTC sought the apex court to direct the Centre government to set up an authority led by a retired apex court judge along with technical members for the protection of consumers under the Petroleum and Natural Gas Regulatory Board Act, 2006.

Advocate Giri told the bench about differential price above market rate being charged from KSRTC making it to pay Rs 7 per litre, further burdening the transport corporation.

The Indian Express on Monday carried the transcript of the Idea Exchange event held online on March 5. Kerala Governor Arif Mohammad Khan participating in the event was asked about his raising of the issue of the minister's staff pension and how the Opposition seemingly opposed him. The governor responded that he had no power to put an end to it and added the Apex Court pulls up Kerala over ministers' staff pension that only an elected government could take a decision on it.

"Here, every minister appoints more than 20 people on a 'quo terminus' basis, and they become entitled to pension after two years. So one set of people resign from their positions, another set of people comes in. In one term, every minister appoints about 45-50 people, who later work full-time for the party. They receive their salary in the form of a pension from the government. Nowhere in the country is this thing happening. Every party is benefitting from this scheme. And I find it highly improper," he is quoted as saying.

Pension for personal staff of ministers in Kerala was introduced in 1994 with retrospective effect by the then Congress-led UDF government. The practice has since been adopted by successive governments, including the CPM-led LDF, which is currently in power, Indian Express reported.