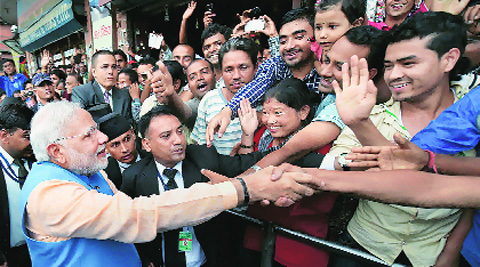 Hannover: After a successful trip to France, Prime Minister Narendra Modi arrived in Hannover on Sunday on a two-day visit to Germany with economic and industrial cooperation high on his agenda.

Modi, along with German Chancellor Angela Merkel, will inaugurate the world's biggest industrial fair, the Hannover Messe, on Saturday. India is the partner country of the fair this year.

Modi will seek to hardsell his Make in India campaign during a meeting with chief executives of German companies.

Later on Saturday, he will visit the Hannover City Hall where he will unveil a bust of Mahatma Gandhi.

His last programme of the day will be a banquet hosted in his honour by Merkel.

On Monday, the prime minister will inaugurate the India pavilion at the fair along with Merkel and will also attend a Indo-German business summit.

Later, he will leave for Berlin where he will visit a science and technology academy as well as a German railway station to take stock of railway modernisation.

Germany is the second leg of Modi's three-nation tour. The third and last leg will take him to Canada on Tuesday.