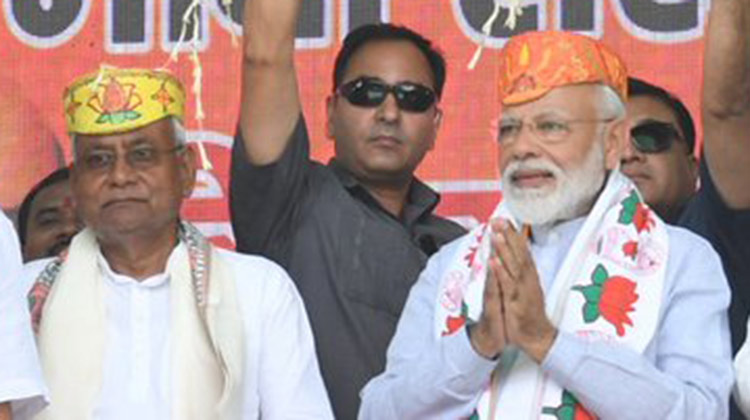 "BJP ke ishare par hi sab kuchh ho raha hai JD-U ko torne-phorne ke liye (The attempt to split the JD-U is being made at the behest of the BJP). Manjhi is encouraging and trying for horse trading," Nitish Kumar told media outside Raj Bhawan here after he, along with party chief Sharad Yadav and RJD chief Lalu Prasad, met Governor Keshri Nath Tripathi and formally staked claim to forming the next government in the state.

Nitish Kumar, along with 130 legislators belonging to his JD-U, the RJD, the Congress and the CPI, marched to Raj Bhawan to meet the governor.

"It appears that Manjhi has got horse trading licence after he met Modi in Delhi," Nitish Kumar said.

"We, including Yadav and Lalu, have informed Governor Tripathi that majority is with us and we are ready to prove it in the state assembly any time either today (Monday), or within 24 or 48 hours," he said.

He said they will wait for the decision of the governor to invite him to take oath and form the next government.

But Nitish Kumar threatened that if the governor failed to invite him to form the next government soon, they will parade their legislators before the president in Delhi.

"We will visit Delhi along with 130 legislators to meet President Pranab Mukherjee if not invited to form the government despite majority support," he said.