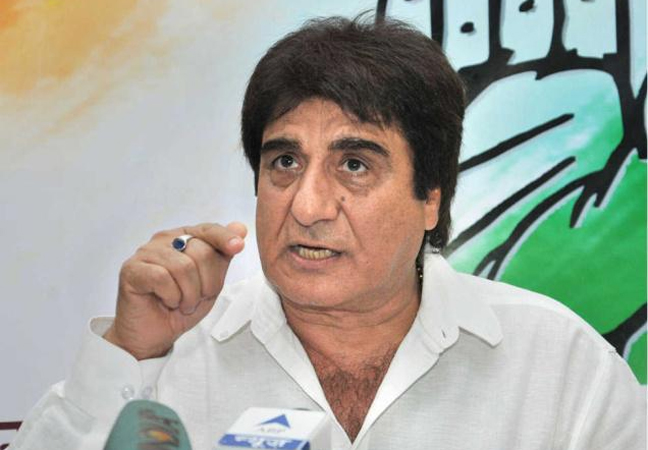 New Delhi: The Congress on Tuesday appointed actor-turned-politician Raj Babbar as party chief in election-bound Uttar Pradesh amid indications that Priyanka Gandhi Vadra could play a bigger role in the party's campaign.

Announcing Babbar's appointment at a press conference in the evening, the party did not name a chief ministerial candidate in the state where it faces tough contest in the assembly polls expected to be held early next year .

Nirmal Khatri, who is the outgoing party chief in the state, has been made chairman of the state screening committee to recommend candidates for the assembly polls.

Masood has faced controversy earlier for his threat to chop Narendra Modi "into pieces" in the run-up to the 2014 parliamentary elections.

Azad did not give a specific answer to questions about role of party President Sonia Gandhi's daughter Priyanka Gandhi Vadra in the crucial elections.

"Everyone's role in the Congress party is important. She played a role in the UP elections earlier and will keep playing the role," he said.

Priyanka Gandhi Vadra has been campaigning in constituencies of her mother and of her brother and party vice president Rahul Gandhi. Congress leaders have indicated repeatedly that she will play a bigger role in Uttar Pradesh and would campaign outside the two constituencies.

She had met Azad earlier in the day, stoking speculation about her role.

Asked about this, Azad said: "Is there any ban in meeting? There is no ban in meeting. When time comes at that point of time we'll announce."

"There have been requests from the workers that she should campaign in their constituencies. But elections have not been declared. They will declared in December-January," he added.

Azad said the party will also form a campaign committee and coordination committee in Uttar Pradesh.

Congress could win only two of 80 seats in Uttar Pradesh in the last Lok Sabha polls - with the winners being Sonia Gandhi and Rahul Gandhi winning their seats. It is has been out of power in the state for over two decades.

Sources said the party was still weighing whether it should fight the polls alone or seek an alliance with the Bahujan Samaj Party as its main target is to stop the Bharatiya Janata Party from coming to power in Uttar Pradesh.

Raj Babbar, 64, has been a party spokesperson. He is a three-time member of Lok Sabha and now represents Uttarakhand in the Rajya Sabha. He has acted in more than 150 films.

Former Delhi Chief Minister Sheila Dikshit may also be given role by the party in Uttar Pradesh.