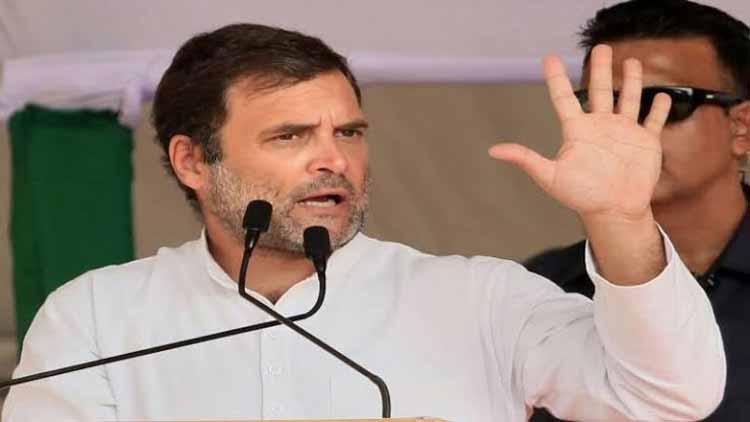 New Delhi: Congress Vice President Rahul Gandhi on Wednesday called the demonetisation a scam as opposition MPs staged a protest outside Parliament over the issue.

"We feel this decision is a scam. The Prime Minister had informed his close friends about this before the announcement. We want a JPC to probe this," Gandhi said during a protest with 12 other opposition parties.

"What the Prime Minister has done is the world's biggest impromptu financial experiment.

"He (Modi) can go to a pop concert and speak, but 200 MPs of opposition are standing here demanding his presence," he said.

Gandhi said even Finance Minister Arun Jaitley was not aware of the decision, but added that many industrialists and BJP members were in the know of the note ban decision in advance.

"PM did not ask anyone, not even Finance Minister or the Chief Economic Adviser, before taking this decision. But there were many in party (BJP) and many industrialists, who were aware. Big deposits were made in banks before this decision," he said.

The opposition members held placards with slogans like "Not a surgical strike, carpet bombing on common people", "Demonetisation of hard earned money", "Save poor people" and "Stop persecution of common people".

Speaking after the Lok Sabha was adjourned till noon, Gandhi said the government was scared of s debate under adjournment motion.

"There were at least 200 MPs standing outside who want to speak in debate on demonetisation. We want to speak... Government is afraid of allowing us a debate under adjournment motion."

Both houses of Parliament have seen repeated adjournments since the beginning of winter session on November 16 over the issue demonetisation that has triggered a cash chaos in the country.

In the Lok Sabha, opposition members want a debate under adjournment motion which entails voting. In the Rajya Sabha, which started a debate on demonetisation on the first day, the opposition is seeking the presence of the Prime Minister in the house.