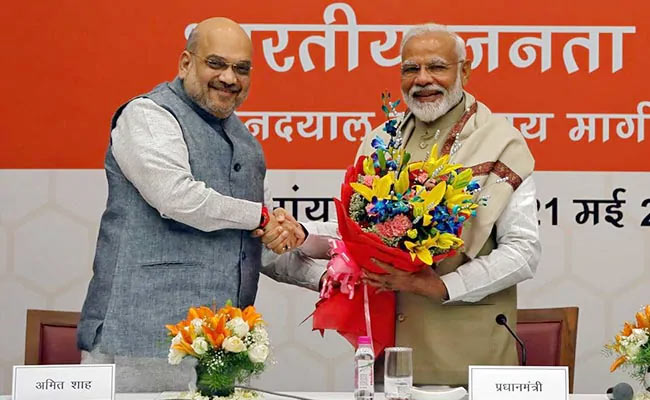 Lucknow: Bharatiya Janata Party (BJP) President Amit Shah on Friday said that the government would facilitate talks on the Ram Temple if both sides agree to come to the table.

Responding to a question on when the proposed Ram Temple will be built in Ayodhya, Shah said it depends on the court verdict.

"However if both sides agree to start talks on the dispute, the government would surely facilitate," Shah said at an India TV conclave here.

Speaking on his party's prospects in the upcoming Uttar Pradesh Assembly elections, Shah said that the BJP is set to win a two-third majority in the polls, adding that this time the main fight is between the BJP and the ruling Samajwadi Party.

"The Congress is nowhere in the picture. It is mainly cutting into the votes of Samajwadi Party and Bahujan Samaj Party," he said.

Asked whether the entry of Priyanka Vadra can change equations, the BJP President said: "It is for the Congress to decide, but her entry would not have much impact."

Asked why his party has not projected its chief ministerial candidate in Uttar Pradesh, Shah said, "The party has not yet decided on this. We will decide at an appropriate time. We do have a dozen leaders with potential of becoming a Chief Minister."

On BSP supremo Mayawati's apprehension that the BJP at the Centre may go in for more violence in Kashmir or a war with Pakistan to win the crucial Uttar Pradesh elections, Shah said: "Kashmir is not a political issue, and it should not be. All the main political parties have backed the government on Kashmir."

"Mayawati should remember that her party failed to win a single Lok Sabha seat in 2014 without a bullet having been fired," he added.