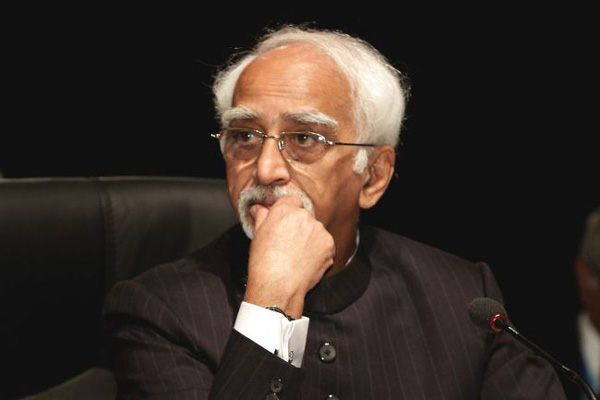 "It is also a challenge to emphasise that equality has to be substantive and that freedom of religion be re-infused with its collectivist dimensions.

"And that toleration should be reflective of the realities of Indian society and lead to acceptance," he said in his address at the 25th annual convocation of the National Law School of India University here.

Stressing tolerance has to become an essential national virtue to promote harmony transcending sectional diversities, he said: "Yet tolerance alone is not a strong enough foundation for building an inclusive and pluralistic society.

"It must be coupled with understanding and acceptance. We must, said Swami Vivekananda, anot only tolerate other religions, but positively embrace them, as truth is the basis of all religions'."

Ansari said that the "version of nationalism" that places cultural commitments at its core is usually perceived as the most conservative and illiberal form of nationalism. "It promotes intolerance and arrogant patriotism," he said.

"For many decades after independence a pluralist view of nationalism and Indianness reflective of the widest possible circle of inclusiveness and a 'salad bowl' approach, characterised our thinking.

"More recently an alternate viewpoint of 'purifying exclusivism' has tended to intrude into and take over the political and cultural landscape. One manifestation of it is 'an increasingly fragile national ego' that threatens to rule out any dissent however innocent. Hyper-nationalism and the closing of the mind is also aa manifestation of insecurity about one's place in the world'."