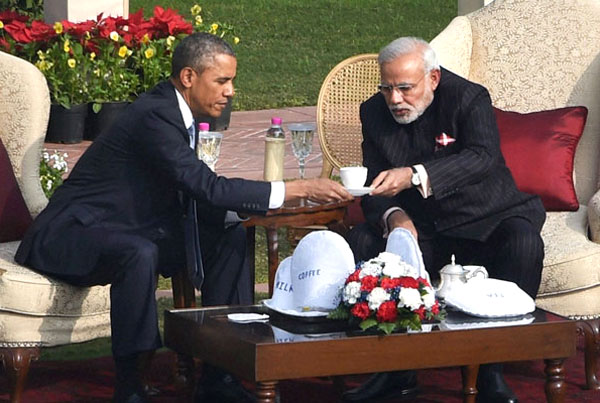 New Delhi: As a debate rages over growing intolerance in the country, former US President Barack Obama on Friday disclosed that he had privately told Prime Minister Narendra Modi that India must not split on sectarian lines and that it must cherish the fact that Muslims here identify themselves as Indians.

"Particularly in a country like India where you have such an enormous Muslim population that is successful, integrated and thinks of itself as Indian and that is unfortunately always not the case in some other countries where a religious minority nevertheless feels a part of. I think that is something that should be cherished, nurtured and cultivated.

"And I think that all farsighted Indian leadership recognises that but it is important to continue and reinforce that," he said speaking at the Hindustan Times Leadership Summit.

Obama, who was making his first visit to India after demitting office earlier this year, was reminded of his speech at Siri Fort auditorium on January 27, 2015 -- the last day of his last visit to India as US President -- in which he sounded caution "against any efforts to divide ourselves along sectarian lines" and pointedly asked if the message was directed at the Modi-led BJP government.

He said the message was meant for "all of us" and "the same thing" was told "in private to Prime Minister Modi".

"If you see a politician doing things that are questionable one of things as citizens you can ask yourself is am I encouraging or supporting or giving licence to the values? If communities across India are saying we are not going to fall prey to division then that will strengthen the hands of those politicians who feel the same way."

Asked how Modi responded to his message on religious tolerance particularly in the wake of Western media highlighting incidents of lynching in the name of cow protection and love jihad cases, Obama dodged a direct reply saying his goal was not to disclose his private conversations with other leaders.

But, he said, Modi's impulses recognize the need for unity in India "to advance to the great nation status that India possesses and will continue and amplify in the years to come".

He said he had shared the concern in public in the United States of America, in Europe "because people feel worried and insecure about all the changes some of which are economic but some of which are cultural and social".

"There are demographic changes taking place. Migration. People start looking different. There is a collision of cultures. People see much more vividly the differences between people."

In an interactive session punctuated with humour and loud applause from the audience that included Congress Vice President Rahul Gandhi, Obama said all humans inherently try to make distinctions to make themselves feel more important than others.

And these distinctions, he said, "are sometimes based on races, on religion, on class and always based on gender".

He said a counter narrative had always been taking place at all times in the world but has become louder now.

"It sometimes happens in Europe, in America and sometimes you see it in India where those old tribal impulses re-assert themselves."

He said some elected leaders try to push back against those impulses and some try to exploit them.

Obama also spoke of how he admired Modi and his predecessor Manmohan Singh alike for their "political courage".

Asked about his relationship with Prime Minister Modi, Obama paused a bit and said: "I like him and I think he is that he has a vision for the country that he is implementing and is in many ways modernising the bureaucracy."

He heaped praise on former Prime Minister Manmohan Singh, who has come under attack from the ruling BJP, saying he was a great support in the aftermath of the 2008 financial crisis.

"But I really was also great friends with Singh, and when you look at the work and the steps that Singh took to open up and modernise the economy and launch what I think was really the foundations for the modern Indian economy. That is also important.

"Here is the bottom line. Because India is a democracy, it has politics. And that is a healthy thing. As a non-Indian and as US President my job was to work with whichever party was in power. Keep in mind that Singh was primary interlocutor with me when we were saving the country from a global financial meltdown.

"But, Prime Minister Modi was the primary partner in unlocking the Paris Accord. Neither of those things was easy and both required some political courage back here in India."

Obama jokingly said he had avoided journalist Karan Thapar's attempt to get him into any diplomatic trouble.

"What I want to be very clear about is, that what I found with both leaders was that strong US-India relations were important; India's movement towards a more modern economy that would give opportunity and lift hundreds of millions of people out of poverty was important; that electrifying the countryside was important; rebuilding infrastructure was important. And each leader obviously had a certain view about how that was going to be accomplished. And I found both of them to be engaged, honest, direct with me.

"So you would not get me to play those games when it comes to my good friends in India," he added with a smile, to loud laughter from the audience.