We worship Lord Shiva but don't use faith for political mileage: Rahul 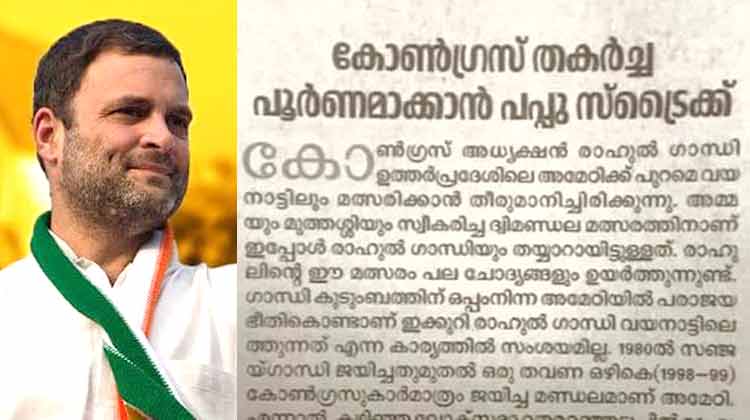 Amreli (Gujarat): Congress Vice President Rahul Gandhi, clarifying on Somnath Temple register controversy, has said he and his family members are "Shiv bhakts" (devotees of Lord Shiva), and he does not use his faith for political mileage.

Gandhi also said that he did not sign on the (non-Hindu) register. "I didn't sign on the register... BJP's people had done that. I just signed on the visitors' book," he said.

"My grandmother, my family... we are devotees of Lord Shiva and we don't need any certificate from others. Faith is a personal matter, we don't want to do dalali (brokerage) on our faith... Don't want to use our faith for political mileage of it," said Gandhi on Thursday while addressing a meeting here in Gujarat.

"These issues are personal and usually kept in private. We don't want any certificates on our faith from anyone," he said.

A major controversy broke out on Wednesday over the Congress Vice President's visit to Somnath Temple with the BJP questioning his faith, while the Congress hit back accusing the BJP of playing dirty politics and maintained Rahul Gandhi was a "devout Hindu".

The controversy arose over Gandhi's media coordinator Manoj Tyagi signing the register meant for non-Hindus, which the Congress claimed was manipulated later by adding the names of Rahul Gandhi and Ahmed Patel.

Moments after his visit, the social media was abuzz with pictures of a register showing the signature of Manoj Tyagi, with names of Gandhi and Patel on the left side.

Tyagi issued a statement that he had just signed the register in order to take media personnel inside the temple and not entered Rahul Gandhi or Ahmed Patel's names. "These would have been added later," he said in the statement.