Hope no Kejriwal will emerge from my movement again: Anna Hazare 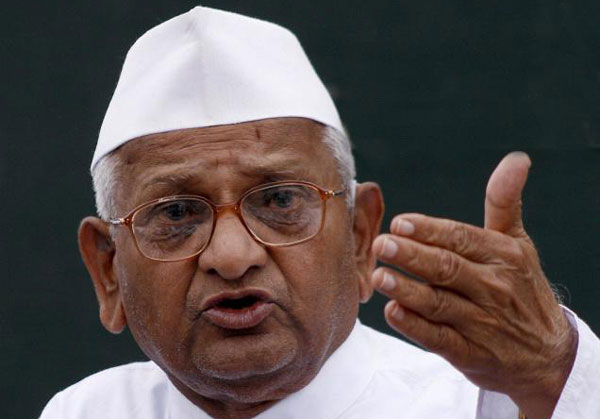 Agra: Social activist Anna Hazare has said he hoped that no Arvind Kejriwal emerged from his movement again.

Delhi Chief Minister and Aam Aadmi Party (AAP) supremo Kejriwal had taken part in Hazare's anti-corruption movement in 2011. Subsequently, he had parted ways with the social activist and launched his own political outfit.

"I hope no Kejriwal comes out of my movement again," he told reporters here after addressing a public meeting at the Shahid Smarak here Tuesday.

Hazare said a big rally would be organised in the national capital on March 23 and urged farmers to join it in huge numbers.

He accused the erstwhile UPA government at the Centre of failing to act on the Jan Lokpal Bill.

"The (Narendra) Modi government later diluted the provisions of the Jan Lokpal Bill. Both the Congress and the BJP are guilty (in this regard)," the 80-year-old social activist said.

Lamenting that even after 70 years of achieving independence, democracy, in its true sense, was yet to come to India, Hazare said, "We do not want a government of capitalists. No Modi, no Rahul (Gandhi). We want a government which works for farmers' interests."

The Hazare-Kejriwal split came in 2012 after a roller- coaster ride of 18 months in which they came together to run a high-steam anti-graft movement.

The activist had also refused to accept the survey done by India Against Corruption which overwhelmly favoured a political path and had said that he did not agree with the exercise done through social networking sites.