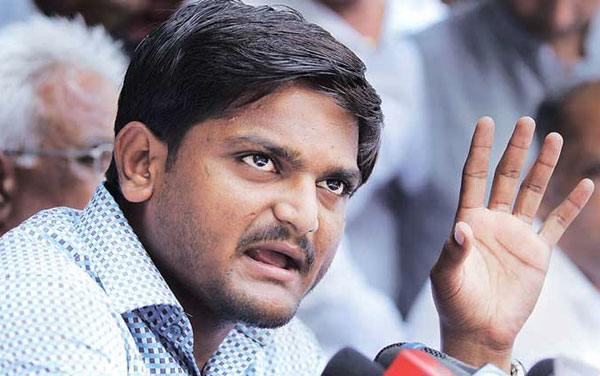 Himmatnagar (Gujarat): Firebrand Patidar leader Hardik Patel on Tuesday returned to Gujarat after six months in exile with a renewed vigour to continue his fight for reservation to his community, asserting that if it was not granted, "we know how to snatch it".

Hardik Patel, 23, who has been fighting for reservations to the Patidars under the Other Backward Class (OBC) category in government jobs and educational institutions for the last one and a half years, was externed from the State on Gujarat High Court orders following sedition charges on him in July last.

He said reservation was a legitimate right of the Patels according to their numbers and was constitutionally possible for the government to grant if it wished to. "There are 1.5 crore Patidars in Gujarat," he said.

Returning from Udaipur in neighbouring Rajasthan, Patel told a huge and responsive gathering of Patidars in this north Gujarat town that he had no fear left after 18 months in jail, including six months in exile, and dared the Bharatiya Janata Party government to arrest him again.

"They slapped 'desh droh' (sedition) charges on me. What more can they do to me? Hanging someone is not easy in this country and if they give me life prisonment, I would still be out at the age of 37 years, I am just 23," Patel asserted, to loud cheers from the crowd.

He once again drew a spirited applause when he said he would take on the "taanashahi (dictatorship)" of this government head on and called upon the people to be ready for a "dangal if they put me behind bars."

Without naming anyone, Patel asserted in Gujarati, "General Dyer was better than the present version for the former went into a narrow street and killed people while this Dyer got killed our 14 people in an open ground."

The Patidar Anamat Andolan Samiti (PAAS) leader was referring to the "police atrocities" on Patels after his mammoth first rally on the GMDC Grounds in Ahmedabad in August 2015 during which 14 people died and several others were injured. Scores were arrested on various charges, which were gradually withdrawn after the agitation grew stronger.

He told the policemen on duty that he did not blame them for the GMDC Grounds episode since "you were merely obeying orders from the top. You cooperate with us because many of you are also on fixed pay like many state employees, who knows someone from this huge crowd will become the Chief Minister some day".

He said he had no personal ambition at all, but had "three clear goals - to fight for 'saachu sushaashan' (honest governance), freedom from rule of fear and reservation for the Patidars".

Referring to firebrand young Dalit activist Jignesh Mevani, who joined him on the podium and expressed his solidarity, Patel said he had no issues with reservation benefits being given to the Dalits and OBCs. "But I have a problem if a Patidar community girl gets 95 per cent marks and still can't admission to an MBBS course... "I will not let this happen," he said.