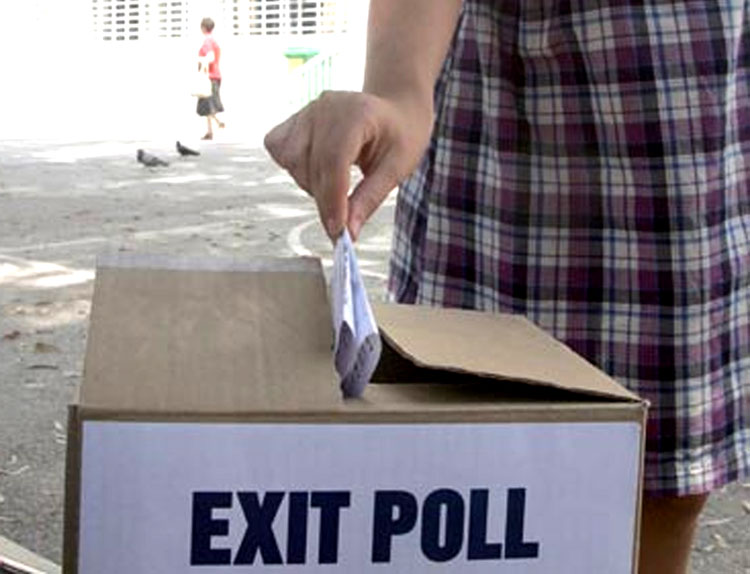 New Delhi: Exit polls Thursday projected a hung assembly in the key Hindi heartland state of Uttar Pradesh, with BJP likely to lead the table, winning anywhere between 164 and 210 of the 403 seats.

Most polls also forecast a close fight between the Congress, which is seeking to return to power in Punjab after a hiatus of 10 years, and Arvind Kejriwals AAP, making its debut in the assembly polls in the state.

They have predicted victory for BJP in Uttarakhand, but the saffron party, though likely to emerge as the single largest party in Goa, was projected to fall short of a majority.

Times Now-VMR poll forecast 190-210 seats for the BJP in the UP assembly, while India News-MRC gave it 185 and ABP- Lokniti CSDS 164-176 seats. If BJP wins UP, it would be a return to power for the party in the politically significant and volatile state after 15 years.

India Today-Axis exit poll predicted 62-71 seats for the Congress in 117-member Punjab assembly, a comfortable majority, and 42-51 to Arvind Kejriwal-led AAP. The Shiromani Akali Dal-BJP combine was projected to be decimated in the state which it has ruled for a decade. All polls showed the alliance getting reduced to a single digit tally.

However, India TV-C Voter projected 59-67 seats for debutante AAP and 41-49 for the Congress. India News-MRC and News 24-Chanakya forecast a dead heat by giving 55 and 54 seats each to both parties.

BJP looked set to return to power in Uttarakhand, with India Today and News 24 projecting a comfortable majority for the party, giving it 46-53 and 53 seats respectively, in the 70-member House, way more than the halfway mark of 30. However, India TV gave 29 and 35 seats to the two parties.

In the NDTV poll of polls, an average of several exit polls, the BJP was projected to win 179 seats, the SP-Congress 136 and the BSP 77 seats in the countrys largest state.

The channel, however, later revised its projection, giving BJP 211 seats, a clear majority, followed by SP- Congress combine 122 and BSP 61.

It forecast 55 seats for the Congress in Punjab, closely followed by the AAP with 54 seats. The incumbent Akali Dal-BJP alliance was predicted staring at a virtual decimation with only 7 seats in the 117-member assembly.

In Uttarakhand, it gave the BJP a majority with 43 seats followed by the ruling Congress with 23.

In Manipur, it predicted a close fight between the ruling Congress and the BJP with the former getting 26 and the latter 24 in the 60-member assembly. Congress has been ruling the northeastern state for the last 15 years.