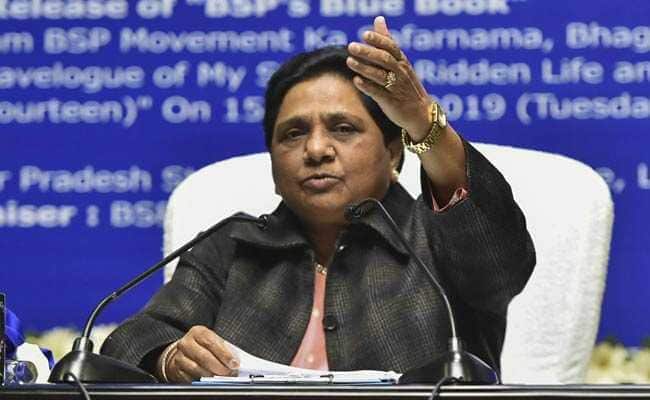 Lucknow: BSP chief Mayawati, whose party received a major drubbing in the Uttar Pradesh Assembly polls, Saturday alleged that the EVMs were tampered with in such a way that whichever button was pressed, the vote went to BJP.

Terming the results as "shocking", she said the Election Commission should stop the counting and withhold results and hold fresh polls using traditional paper ballots.

As results and trends went in favour of the BJP in a big way, she called a press conference in a hurried manner and dared Prime Minister Narendra Modi and BJP chief Amit Shah to ask the poll panel to hold fresh elections in the state "if they have an iota of morality and honesty left in them".

Mayawati said this trend will have a "very bad bearing" on democracy in the country and will amount to crushing it.

"The results in UP and Uttarakhand are surprising and not palatable to anyone...it seems EVMs did not accept votes polled for any party other than BJP," she said.

"It is a matter of common discussion here that even if button is pressed for any other party, vote will be polled in favour of BJP," Mayawati said.

The BSP chief claimed that a similar complaint was made by her partymen in the 2014 Lok Sabha polls but she had preferred to stay silent thinking it was Modi wave and anti-Congress sentiment.

She said it was "unacceptable" that the BJP was winning even in Muslim-dominated areas.

"Muslims constitute 20 per cent votes in the state and the BJP did not give a single ticket to Muslims...but in Muslim- dominated seats also the results went in the BJP's favour and this is unpalatable to the party," she said.

The BSP chief said that she has written a letter to the Election Commission in this regard and demanded that the declaration of results should be immediately stopped and fresh polls be held in the state using paper ballots after an impartial inquiry into the EVMs.

Issuing an open warning to the BJP, Mayawati said they need not be happy that they got a majority as they have "killed democracy and this is betrayal of democracy".