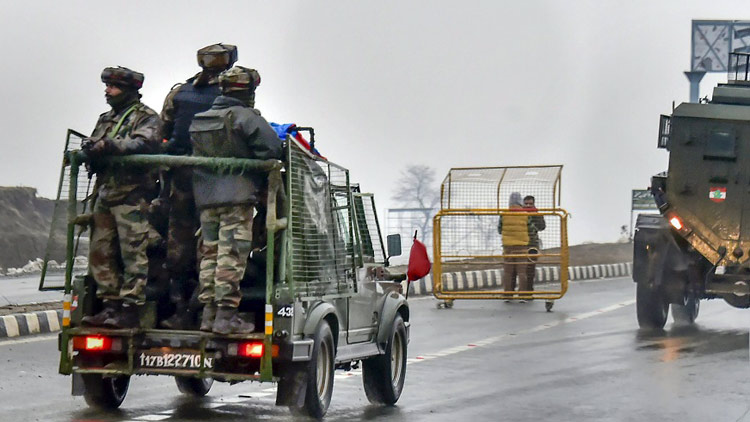 Paramilitary troopers stand guard during the second day of strike called by separatists against the National Investigation Agency (NIA) raids at residences, in Srinagar on February 28, 2019.

New Delhi: The Supreme Court today asked the Centre and the Jammu and Kashmir government to "sit together" and decide contentious issues including the question whether Muslims can be treated as minority in the state.

A bench comprising Chief Justice J S Khehar and Justices D Y Chandrachud and S K Kaul asked both the governments to resolve the issue and submit a report to it within four weeks.

"This is a very very important issue. You both sit together and take a stand on it," the bench said.

Last month, the apex court had imposed a cost of Rs 30,000 on it for not filing its reply to a PIL alleging that minority benefits are being enjoyed by majority Muslims in Jammu and Kashmir.

It had accorded a last opportunity to the Centre to file its reply, saying the matter is very important.

The court had, however, allowed the counsel for the Centre to file the response after depositing the cost and had also noted that a fine of Rs 15,000 was also imposed last time also for the same reason.

Earlier, the court had issued notice to the Centre, the state government and the National Commission for Minorities (NCM) on the plea filed by Jammu-based advocate Ankur Sharma, alleging that benefits accruing to minorities were being taken away by Muslims, who were in a majority in Jammu and Kashmir.

The plea also alleged that rights of religious and linguistic 'minorities' in the state were being "siphoned off illegally and arbitrarily" due to extension of benefits to "unqualified sections" of the population.

It has been settled that the identification of minority communities has to be decided as per the population data of the state in question, Sharma had said.

The apex court, however, had refused to restrain authorities from disbursing benefits to any community in the state.

The PIL has also sought the setting up of State Minority Commission for identification of minorities.

"The population of Muslims in Jammu and Kashmir according to the 2011 Census is 68.31 per cent. Communities which are eligible to be notified as minorities, were not awarded their due share of scholarship owing to their non-identification as minorities, thereby jeopardising their constitutionally guaranteed rights enshrined under Part III of the Constitution of India.

"This clearly reflects the unfairness and discrimination of the State towards the communities in the state of Jammu and Kashmir which are eligible to be notified as minorities," the petition alleged.