No invite to Pope: Issue brewing 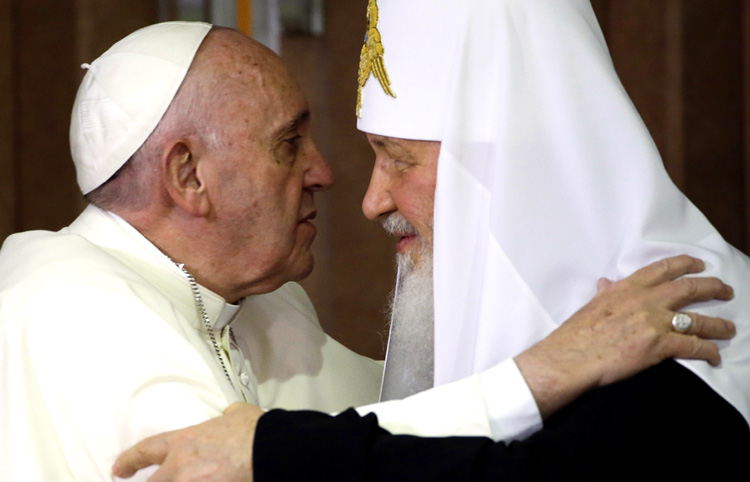 New Delhi: A controversy has been raised by the reported refusal of the government to invite Pope Francis although he had wanted to visit India in a South Asian tour covering Bangladesh, and (now) Myanmar during 27 Nov- 2 December.

The Pope is reported to have dropped plans to visit India solely because he was not invited at the behest of Hindutva groups. The Vatican and the Catholics are understandably piqued by this.

India had figured first among the countries to be covered in Pope Francis' first visit to South Asia ever since he ascended papacy. India, which has a larger population of Christians than Bangladesh or Myanmar, was top on the Pope's priority list, as the largest democratic country in the world apart from its Christian population.

The Catholic church leaders of India too had exerted pressure on the government to extend an invitation to him. But the government apparently succumbed to the Sangh parivar outfits who raise the slogan 'ghar vapasi' (or home coming), the phrase used to denote the reversion of Christians to Hindu faith after their coversion to Christianity.

The Vishwa Hindu Parishad (VHP) and other right-wing groups such as the Bajrang Dal, who oppose Christian missionary work, have been demanding an end to the church's conversion activities. They had also opposed Pope John Paul II's visit to New Delhi in November 1999.

Pope Francis "will have to clarify how conversion of people from other religions is justified," said Bajrang Dal activist Angad Prasad from Assam state in northeastern India, as per news reports which also quote VHP sources as saying that they have a few questions for the pope, in an obvious reference to the conversion issue that Hindu groups campaign against. But Pravin Togadia, international president of the VHP said"I am not sure whether he (Pope Francis) was ready to come or was keen enough,"

Pope, being also a head of state, could visit a country only on an official invitation from another country as per diplomatic protocol, and would need a few months of preparation. Neither the government nor the Vatican has issued any official statement explaining why India was dropped.

Pope Francis had told media a year ago that he was "almost sure" of visiting Bangladesh and India in 2017 but in August the Vatican made the surprise announcement of a Nov. 27-Dec. 2 papal trip to Bangladesh and Myanmar. Foreign ministry spokesman Raveesh Kumar, when asked about the papal visit to Bangladesh and Myanmar and whether the government had sent him any invite to include India in the visit, did not give a direct reply but indicated about a scheduling issue. He said a proper mechanism has to be followed to “finalise any VVIP visit” which includes finalisation of mutually convenient dates to both the sides. “India’s link to Christianity is 2,000 years old,” he added.