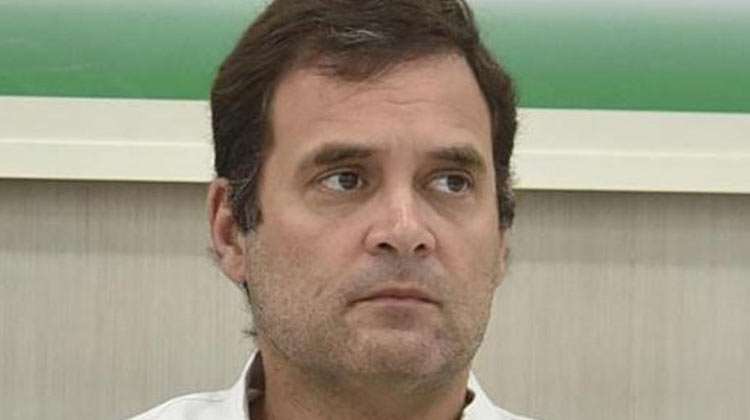 New Delhi: Prime Minister Narendra Modi has "killed" the country's economy by firing "double tap" shots of note ban and GST into it, Congress vice president Rahul Gandhi Thursday said and asserted that only someone with "a very big chest but a very small heart" could do this.

The Goods and Services Tax was "flawed" and had unleashed a "tsunami of tax terrorism", he said, promising that the Congress would strive to reform it "when it came to power".

"Our position is that GST has to be reformed and changed," he said.

The Congress leader described demonetisation as a decision taken without thought or consultation and accused Modi of "crippling" small businesses.

Gandhi also hit out at Finance Minister Arun Jaitley on the economy, alleging that while businesses were "drowning", he had "the nerve to say on TV that 'things are just fine'".

"The way this regime is working, or not working, has led to a 'double tap' killing of the Indian economy. Commandos in hostage situations fire what is called a 'double tap' - two quick, closely placed shots fired at the chest to ensure that their terrorist target is down, is dead," he said.

Modi and his government, Gandhi added, had fired a double tap at the heart of the economy.

"First notebandi - bang -- and then GST - bang -- crippled our economy," he said, addressing the 112th annual session of the PHD Chamber of Commerce and Industry here.

Gandhi hit out at the government over job losses, saying it was ignoring small and medium enterprises responsible for creating jobs and not hearing out their "pain" after the note ban and GST.

"This is a pure man-made disaster. In Modiji's terminology, an MMD - a Modi-Made Disaster," he said.

To inflict such pain, "you surely need someone with a big chest, but a very small heart", he said.

Gandhi said 'Start Up' India was welcome for the economy, but could not be accompanied by 'Shut Up India'.

He said what gives 'Start Up' India its strength is the freedom of expression and dissent.

"You choke it and you choke entrepreneurship," he said.

"The trust in this government is dead. For some reason the PM and his government are absolutely convinced that every single person in the country is a thief," he said.

Gandhi said globally India was being asked if it still believed in its values of compassion and non-violence.

"People once looked up to us for our values and leadership. But today they laugh as we are busy debating whether one of the seven wonders of the world, the Taj Mahal, was actually built by Indians," he said.

The prime minister, he added, had failed to grasp the basic concept of the Indian economy.

"All cash is not black and all black is not cash. Without understanding this basic concept, the prime minister used his vast power to unleash terror on Indians," he alleged.

GST or "Gabbar Singh Tax" was "badly conceptualised and implemented", he added.

"Their GST is wrecked with holes, moth eaten. Flawed in its structure. Punitive in its design. It is forcing businesses to incur massive transaction costs that are destroying them.

"It is creating a 21st century computerised and connected licence raj. GST as this government has formulated has already unleashed a tsunami of tax terrorism and it is only going to get worse," he said.

Joblessness was "extremely worrying" and the government was creating an army of unemployed youth, which is "toxic and dangerous".

"Instead of admitting they cannot and are not providing jobs they are riling communities against each other in a bloody rage," he said. "We are starting at a disaster".