'Absolutely ready' to be PM candidate for 2019: Rahul Gandhi 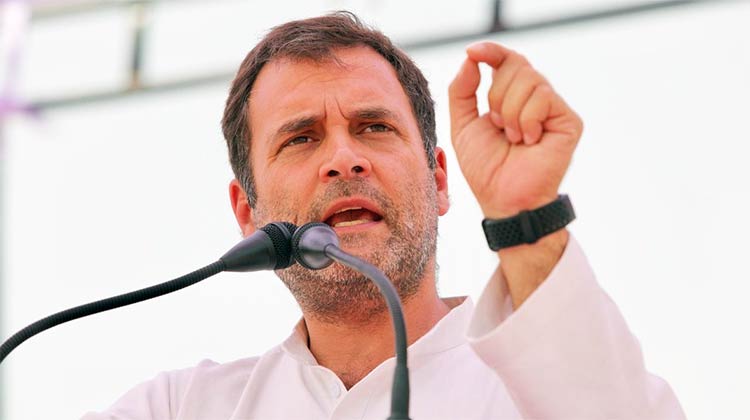 Berkeley: Choosing foreign soil, Congress Vice President Rahul Gandhi has declared he is "absolutely ready" to be the party's prime ministerial candidate for the 2019 general elections.

However, he made it clear that the decision has to be finally approved by the party. Often under attack from the BJP, especially Prime Minister Narendra Modi and party President Amit Shah, over dynasty politics, Gandhi said it "is a problem in all political parties in India" but that was how "most of the country runs like".

"I am absolutely ready to do that," Gandhi, who is widely tipped to succeed his mother Sonia as party President, said when he was asked during his talk on Monday night at a university here if he was ready to be the prime ministerial candidate of the Congress for the next Lok Sabha elections.

This is for the first time the Gandhi scion has publicly affirmed his readiness to be the Congress choice for the top post.

Gandhi, who is on a two-week US visit to interact with political leaders, global thinkers and overseas Indians, was speaking to students at the university where his great-grandfather Jawaharlal Nehru delivered his speech in 1949.

In reply to the question about Congress' prime ministerial choice, Gandhi said it was not fair on his part to go public with that because the party has to approve it.

"...the way our party works. We have an internal system where we elect certain delegates who make that decision. We have an organisational election process that decides, and the process is currently ongoing.

"For me to say that the decision is mine would not be fair. That is the decision the Congress party has to make," the 47-year-old said.

Probed further by the moderator if he was open to the idea, Gandhi nodded his head in affirmation and said: "Yeah, sure."

Gandhi said dynastic politics "is a problem in all political parties in India" but that was how "most of the country runs like".

"That's how the entire country is running. So don't just go after me.... That's what happens in India."

Speaking at the event 'India at 70: Reflections on the Path Forward', Gandhi talked about a range of issues including the Congress' loss in the 2014 general elections in which his party slid to its lowest tally ever in the Lok Sabha.

He admitted that "in around 2012 arrogance crept into the Congress and we stopped having conversations with people" that led to the party's loss in the last poll.

"For rebuilding the party, we need to design a vision that we can use moving forward. Most of what the BJP (government) is doing, is what we once said," Gandhi said citing the examples of the UPA government's MNREGA (Mahatma Gandhi Rural Employment Guarantee Scheme) and the GST.

Gandhi also said that the government's decision to scrap Rs 500 and Rs 1,000 currency notes has led to decline in economic growth that "cost us two per cent loss in the GDP".

He accused Modi of controlling and managing an online machine of over a thousand trolls whose purpose is to destroy Gandhi's credibility and call him "stupid and incompetent".

"There is a BJP machine. A 1,000 guys sitting on computers telling you about me. It's a tremendous machine, all day they spread abuse about me, say that I'm a 'reluctant politician... and the operation is run by the gentleman who is running our country," said Gandhi.

He, however, acknowledged that Modi was a "better communicator" than he is.

"Modi has certain skills, he is a very good communicator, he's much better than me. He knows how to give a message to 3-4 different groups in a crowd, so his messaging ability is very effective and subtle."

Gandhi said the BJP's vision was flawed because it come from "top to bottom" while as the Congress constructed "a bottom-up vision".

He gave an example of dealing with the Kashmir issue and alleged that the government had opened up the space for terrorism in the state.

"When we started, terrorism was rampant in Kashmir. And when we finished by 2013, we basically broke the back of terror, I hugged (then) Prime Minister Manmohan Singh and told him it was one of the biggest achievements."

"For nine years I worked behind the scenes with PM Manmohan Singh, P. Chidambaram, Jairam Ramesh and others on J&K," said Rahul.

He also slammed the BJP-led central government over the incidents of mob lynching and cow vigilantism that damaged India's image.

"I understand what violence does, violence against anybody is wrong. Hatred, anger and violence can destroy us, the politics of polarisation is dangerous," he said, adding "liberal journalists were being shot (referring to Kannada journalist-activist Gauri Lankesh's murder), people are being lynched.

"These incidents are making millions feel that they have no future in their country."

Senior Congress leader Shashi Tharoor, who was present in the audience during Gandhi's speech tweeted: "A speech marked by acuity and passion, and a discussion infused with candour and insight."